It was a rainy and blustery morning in Kodiak as we waited to board the ferry Kennicott that would take us to Homer.  Unpleasant as the weather was, it was forecast to get much worse, with 50kt gusts out at the Barren Islands.  It had been a hectic morning too, with last minute packing, errands and goodbyes.  But we were still near the head of the line for boarding. 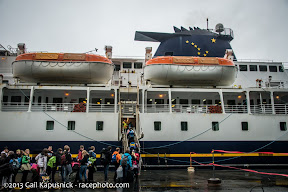 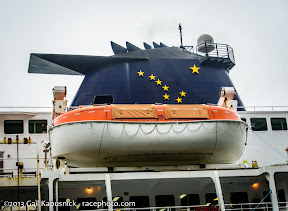 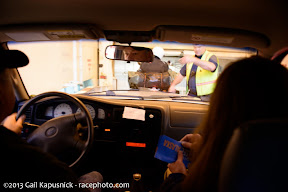 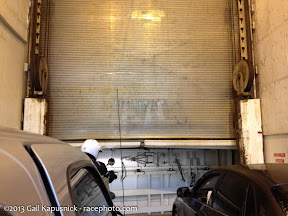 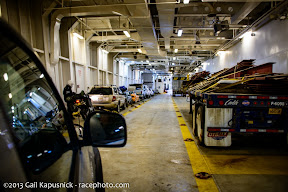 After we left the truck it was securely chained down.  This is critical, especially with forecast rough seas....if a tractor trailer broke loose and took some other vehicles with it, it could cause a capsize. 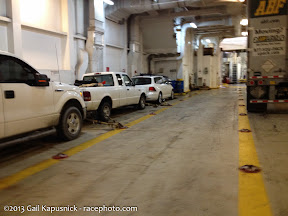 We headed up to the passenger decks and found the pursers desk.  The Kennicott has tiny "roomettes" with 2 bunks, one of which folds up and the other is a dinette that converts into a bed.  While we didn't plan to sleep on the 9 hr crossing, it was nice to have a place to leave our stuff, and sit and eat chips and dip, etc.  For only $27, it was a bargain.  We were scheduled to arrive in Homer around 9:30pm. 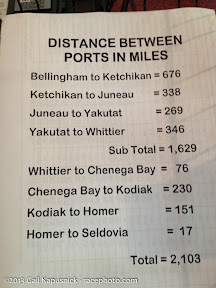 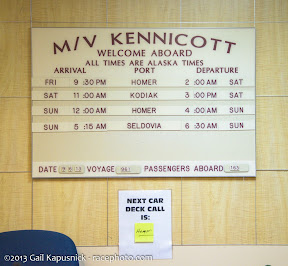 As we were leaving Kodiak we began to wonder exactly where we would stay in Homer.  We had talked about booking a room earlier but forgot in the excitement of leaving.  I broke out the iPad, whose 3g was FINALLY working again, and feverishly sought to find a room before we got out of range.  The Best Western was almost $200 and the rest on Kayak weren't much better.  I found one for $118 and after 2 fruitless attempts to book online, called to find out they were actually full.  They did give me the names of two other budget places not listed on Kayak to try.  The first one, the Pioneer Inn, had a suite for $130.  They sounded nice & the room sounded good so I booked it.  Now one thing about mom & pop places like that is they don't have 24hr check in.  Well, you can wake them up if you have to but they prefer you don't.  :-)  I told them we were on the ferry and we'd likely be late.  They took my credit card, gave me the room #, and told me it would be unlocked with the cc slip on the table.  And if we had to leave early before they were up, just sign the slip & leave it and the keys in the room.  It's a different world.....
That accomplished, I went out on deck to wave farewell to the island.
We caught a glimpse of the Island Mist as we left.  It's a crappy phone pic but the blue bow is barely visible lower left.... 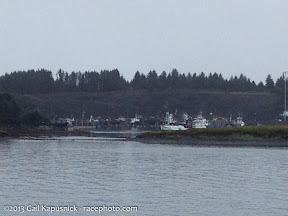 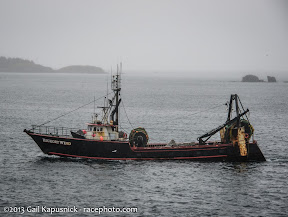 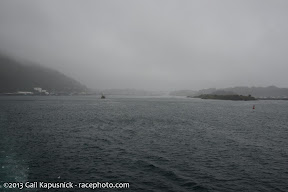 
The wind driven rain and spray quickly put an end to that, not to mention being engulfed in clouds of pot smoke from some dimwit who apparently didn't see the Trooper wandering around the boat.  We saw some local police board in Homer so maybe he did get caught.  I have no issues with people smoking pot but I can't be around it.  The last thing I need is to test positive on a drug test because of secondhand smoke!
Maybe I got some anyway, as I saw a smiley face in this gate!  :-) 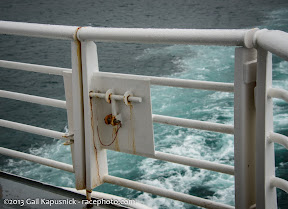 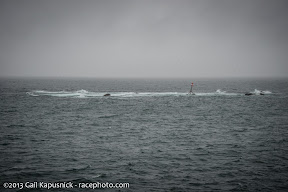 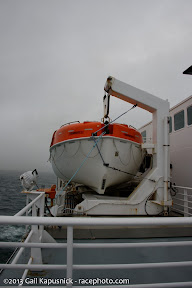 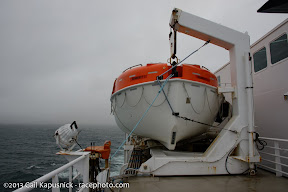 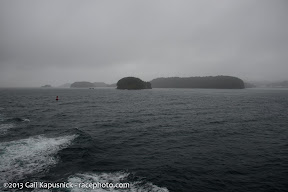 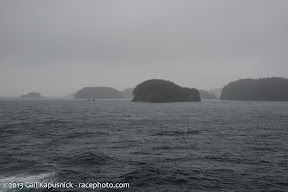 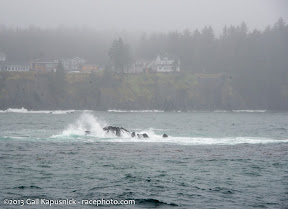 
We then had some lunch....I opted for chowder and it was pretty yummy.  The crossing was really uneventful.  The seas were pretty lumpy for a while.  Mark & Helen napped in the roomette but I really didn't want to sleep.  However, after trying to walk around and nearly going airborne a time or two I decided to sit my ass down before I fell down. :-)  I found a nice seat next to a window near the bow and read for a while.  I drifted off and woke up when Mark found me.  It was time for the movie.  Helen was sound asleep so we went to check it out.  They had a cute little theater on board, and the movie was Oblivion with Tom Cruise.  Mark had rented it on the boat but I didn't watch it then.  It wasn't as bad as I expected.  :-)  After the movie, we ran into Freddie again in the bar (our fishing guide) and had a few beers.  Helen joined us and we headed to the dining room for dinner.  I had the fish and chips, and once again the food was pretty good.  I grabbed some extra horseradish sauce and breadsticks that would come in handy over the coming days.  :-)
We went up to the forward observation lounge and watched the world pass by.  It was still raining but not as bad.  As we approached Homer, the crew put down the shades saying the light interfered with navigation.  Seems to me you could just dim the lights....and it's a pretty poorly designed wheelhouse that is that easily blinded by the vessel's own lights.  But what do I know.  :-)  We went up to the solarium but those windows were a mess. 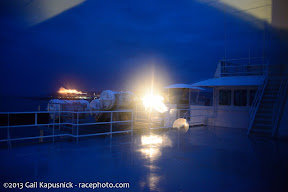 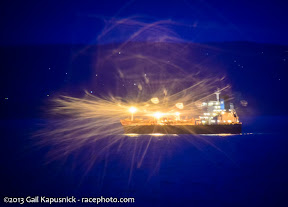 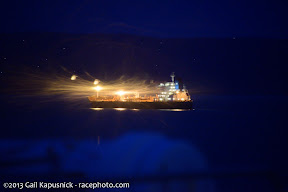 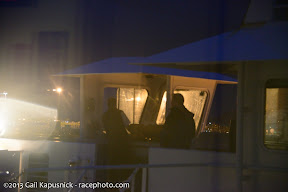 
We docked in Homer and the truly annoying part began.  Waiting to get off.  It took nearly two hours.  First we stood around the pursers desk for 45 minutes waiting to be allowed down to our vehicles.  The crew was unchaining everything, and there was some talk about the tide being so low that the vehicle ramp wouldn't reach.  Plus there were some more law enforcement folks boarding, so we weren't sure if that had something to do with the delay.  When we finally did get down there it was another 45 minutes before we could even start our vehicles.  Not sure what that delay was either.  The unloading process is interesting, a few vehicles  at a time drive onto a platform that rotates and then is raised to dock level.  But it does take a long time. 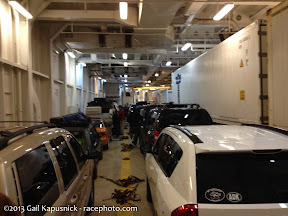 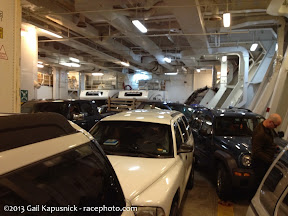 
We were behind this guy with a bunch of goats, chickens, rabbits and god knows what else.  Phew!! 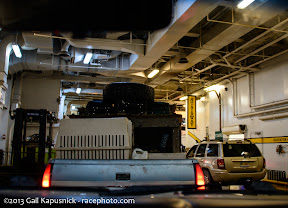 When we finally got off the boat, we drove down the famous Homer spit, but didn't see much since it was dark.  Next time.  We found the Pioneer Inn and it looked WAY nicer than expected, lit up like Vegas with cheery paint and flowers.  As promised, our second floor room had a post-it with our names on the door and was unlocked.  The room was good.  A large living area with a couch (old and pretty dingy but serviceable...I called it the Goodwill couch :-) a daybed which was super comfy, table & chairs & a full kitchen.  With a Tupperware container full of ground coffee.  Nice.  The bedroom had a king-size bed.  It was perfect for the 3 of us, and we even called Freddie to see if he wanted to crash on the couch but he was already set.  I don't think we were up very long, we were all tired.