My stay at the Virgin River Casino in Mesquite was uneventful. It was quieter than I expected, although a fair amount of people started rolling in between 5 and 6 AM, some making an inordinate amount of noise.Of course I had parked facing the wrong direction the night before, so the sun was shining on the south side of the rig. It's better for it to shine on the north side due to the orientation of the solar panels. Plus it really helps to not have it beating down on the fridge and the door. I thought about just leaving it, but decided there was no reason to waste the sunshine so pulled up the jacks and turned around the other way. It turned out to be a good thing I did. I wandered in and got some Starbucks, and considered breakfast but didn't see much that appealed to me. Especially not after gorging myself at the buffet the night before. I took my coffee back to the rig because it was not pleasant to sit at the Starbucks due to the cigarette smoke from the casino.

When I got back out to the rig, I was happy I had went through the trouble of moving it. It was getting warm, and having the entry door in the shade meant I could leave it open and enjoy the breeze. There was not a huge difference in the amperage coming into the panels from switching it from one side to the other so it's good to know that it's not required for that reason alone. Once I finished my coffee I headed down the road.

Driving into St. George I saw a Pilot gas station and decided it might be a good idea to get gas where I knew it would be cheap. I stopped at another Starbucks, because I was trying to get some of these stars built up before the program changed. I'm not sure why. But anyway..... It turned out there were quite a few interesting stores in that area. I went to Dick's Sporting Goods, and Petsmart since I needed some more material for the composting toilet, and then spotted a Redstone olive oil store. What a place that turned out to be! I spent at least an hour in there and probably drank a half a gallon of balsamic vinegar and olive oil, as I tested just about everything in the store. Lots of fun. They had some amazing combos and best of all, they had very small bottles of everything. I don't have the room for giant bottles of balsamic and olive oil. These little bottles, while they may not be the best value, can fit in the drawer. I got coconut vinegar, Persian lime oil, maple vinegar, Kalamata oil, all kinds of stuff. It will be fun to make dressings and whatnot out of those. I did some other walking around bought a cheap sweater, a piece of chocolate with cashews, and a frying pan. Yeah, I know...random.  Then finally headed to Starbucks for coffee and Wi-Fi. By this point it was late enough that I was considering spending the night in St. George, but it didn't look like there were a lot of good options. I decided to shoot for the red Cliffs BLM campground near Leeds Utah. It looked gorgeous.

The drive there was pretty interesting. I knew there were two low tunnels under the freeway that you had to go through. They said they were 11'6 clearance and I'm 10 feet high so I knew it would work. What I didn't expect was how narrow they were! I wasn't sure I would fit. I'm sure I had more clearance than I did, but criminy it looked close. As I was approaching the recreation area I had some jackass in a car on my tail. After coming to the entrance gate I pulled over and let him by. This turned out to be a tactical error. When I got to the campground, that car was pulling into a campsite. It turned out that that was the last open one. Lesson learned. No good deed goes unpunished.  I'll never do that again.  Next option was Quail run State Park, which looked interesting, on the shore of a little reservoir. It was gorgeous. It was also full. Sigh.....

At that point I decided to head for some other BLM land that I had read about in the Frugal Shunpikers Guides to RV Boondocking. It was kind of getting down to the wire at that point, it was getting close to sunset. I found the turn off okay, and the dirt road wasn't too bad, but all the turnoffs to the dispersed sites had me driving into the sun and I couldn't see what I was getting into. That's not optimal. I did find one that was not too far off the road at an angle where I could see where I was going and that's where I ended up. It's a nice spot. Beautiful views around, and very little noise. I've seen quite a few cars go by, but no other RVs and I don't see anyone else camped anywhere. It got really cold really quickly when the sun went down, and I headed inside shortly thereafter.  I was a little skeptical of these guides but some of the sites, like this one, aren't in any of the other resources I use. So they're definitely valuable. (I do get a commission if you use the link above.) 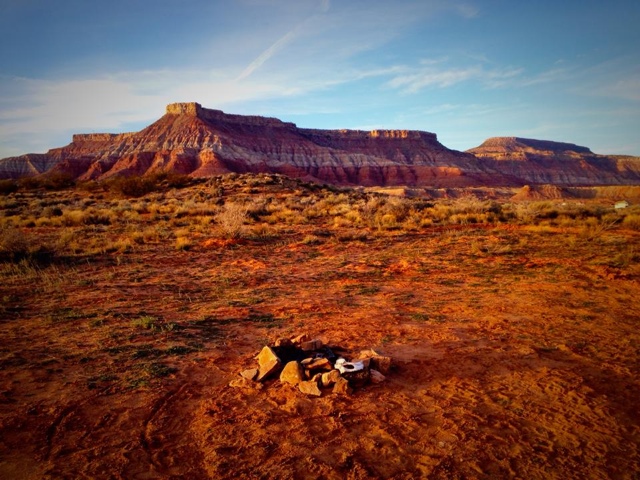 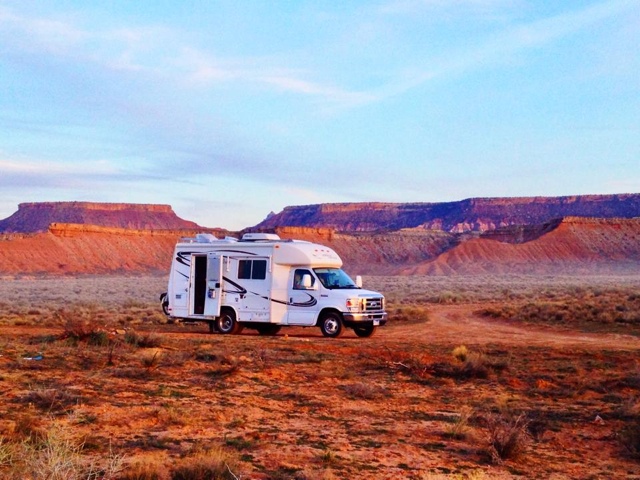 Later I got an email from the flute school with a 320 page flute textbook. What a great book. I read about 100 pages and played for at least an hour. The nice thing about being in such a remote area, no one can hear me play. Otherwise, there is no way I'd be playing the flute until 11 o'clock at night. Even inside the rig, I would worry that I was disturbing someone because sound does carry.

I'm going to head to the park tomorrow, hoping to get a site in either one of the campgrounds. I would like to see a little bit of Zion, and after I looked at the flute schedule again I won't be doing any sightseeing during the school. So tomorrow and Friday will really be it for sightseeing. If I don't get a site there, I guess I can always come back here. I think it's about 15 or 18 miles. I went a bit crazy shopping online the past few days between Amazon and Ebay.......I got two new flutes, a case, a new laptop, a tent and some other assorted stuff all coming to the school hotel. They're gonna love me. :-)
Posted by Gail at 1:48 AM