One of the items on my VA/MD/DC bucket list was a trip down Skyline Drive. As soon as the National Parks reopened, I (and a million other people) started making plans. I had hoped to do a day off swap, work Sunday & be off Mon-Tue, but I was unable to get Tuesday off. I figured the drive would be jammed, but the window of opportunity was closing rapidly. The fall foliage report said the north & central sections were already past peak and most of the campgrounds in the park close Oct. 27th. The weather was supposed to be nice on Sunday & Monday but the lows are already down in the low 30's. So I needed to go this weekend. I have a killer furnace in my PC Cruiser, but my batteries are shot. I can't really run the furnace all night without running them down. I also have a Mr. Buddy portable propane furnace, which I am not 100% sure I like, and definitely don't trust enough to sleep with it running.

I got out of work at 11 am. By the time I got done the prepwork I should have done earlier, stowing stuff, checking tire pressures, etc., it was 11:45. One of the things I did was take down the pseudo-tieback curtains.  They were faded and grungy, and kept getting caught in the mechanism of the blinds.  I think it makes the window look bigger too. 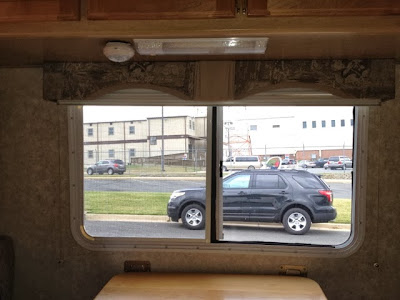 I had thought I might go down 15 and stop at home for some things I forgot like the air mattress, then take 66 to Front Royal and Skyline Drive. I decided not to do that after all and took Rt 7 west. In retrospect, I should have gone the other way. While it was scenic, there are slow and narrow sections, the drive through all of Front Royal was annoying and I was already a bit tired when I got to Skyline. And that road requires concentration.

I arrived at the start of Skyline Drive in Front Royal at around 1:15pm.   And traffic was at a standstill. I didn't take note of how long it took but it wasn't too awful. Even in my short RV with a 9'10" height, I got scraped by a tree branch as I was approaching the entrance gate. 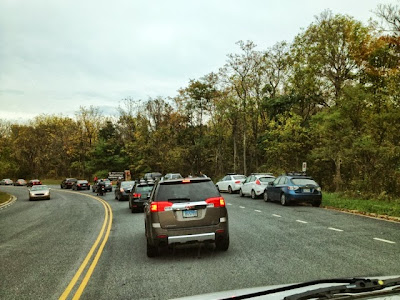 I had my Annual National Parks pass out and ready and breezed right through. I had heard all the overlooks would be jammed and that was true. I stopped at two that were larger and had a few spaces, but the air was hazy and the sky was dark & blustery so it wasn't terribly photogenic. Though the sun did try to peek through at one point. 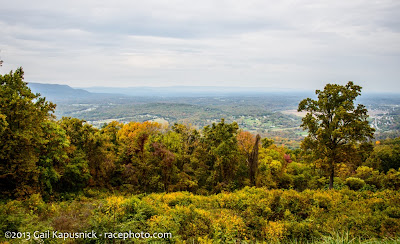 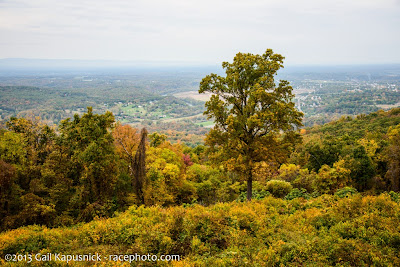 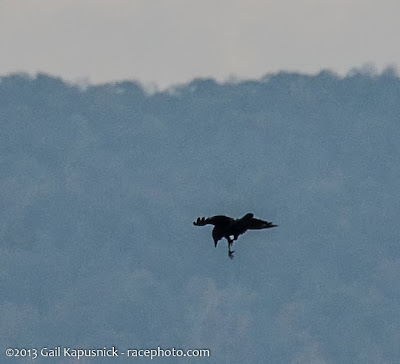 For me, the most impressive part of the drive was a grove of a gorgeous trees in a valley.  A lot of other folks thought so too as there were a ton of cars pulled over.  No room for me...  :-( 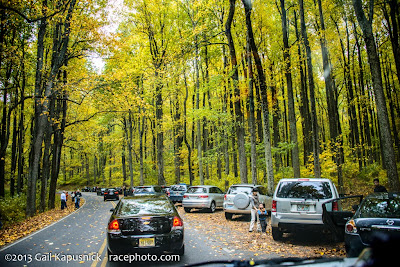 I drove the rest of the way to Big Meadows without stopping. I thought I'd get to the campground, check in, and go for a hike. I got to the CG and found my site. Wow, I thought it would be bigger as it said 35' max length, and said the site was 25' wide. It was a bit of a struggle to back my 22 footer in due to trees and posts. And the paved portion was only slightly wider than the rig. I can't imagine how someone with a 30 footer would do it. But it seems like the 12' tunnel near Luray keeps a lot of the big rigs out. I am the only rv in this row, the rest are all tents. The fact that this is a generator-free loop may also contribute to that.


My campsite in Big Meadows. The trees here were pretty bare. 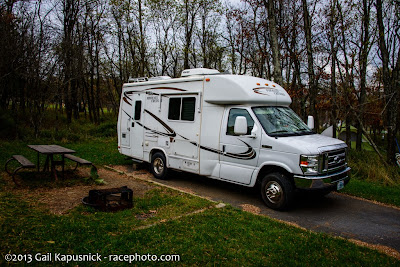 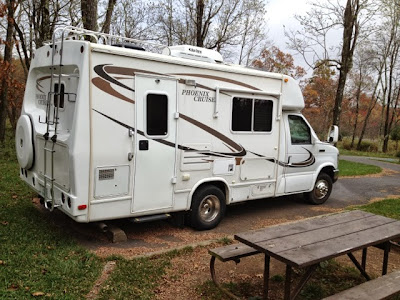 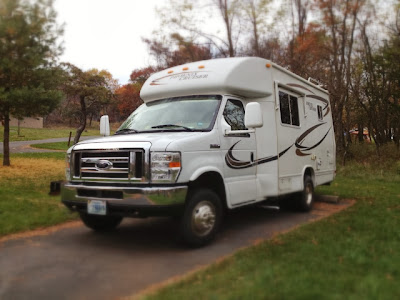 I love the ease of setup compared to tent camping. I park, set the brake, drop the hydraulic leveling jacks and I'm there. It was cold and windy as heck and I was watching people trying to put up their tents from the comfort of my couch. By this time it was around 4pm and sprinkling, and the fact that I was at work at 5am was catching up with me. I decided there was no hiking in my near future. :-) I figured it was a good time to finally wire up my solar panel. I'd been putting that off for forever.  I originally bought a Harbor Freight setup that worked ok but started falling apart almost immediately.  It went back  pretty quick and I bought a Renogy 100watt panel and a Sunforce charge controller but hadn't assembled it yet as I am a bit intimidated by electrical work.  It turned out to be a snap.   I picked up some landscape wire from Lowes and attached MC4 connectors to one end, the one that hooks to the panel. I attached the other end to the controller with wire nuts. The output from the controller had circle terminals on the ends and I had batt clips with those as well. I connected them with bolts, nuts and washers, it's a kinda gerry-rigged setup. But I hooked it up to the battery and it appeared to be charging! Woohoo! I then used a bungee to secure the panel to the picnic table. Yeah, it was that windy. I then walked up towards the lodge. I was only feet from my site when I realized there were deer everywhere. And they were pretty unfazed with my presence.

Deer at my campsite in Big Meadows. 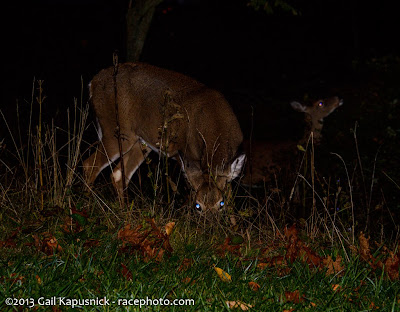 More deer in the campground 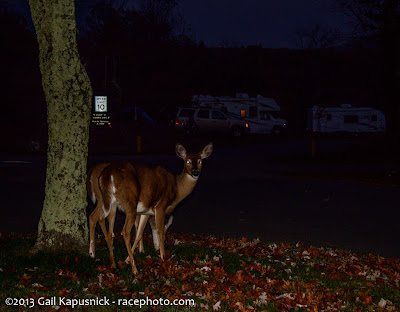 I continued on up to the Lodge and headed to the Taproom. It was a disappointment. The decor/ambiance  was lacking and the service abysmal. I ordered a drink and planned to order dinner.  The drink was a really yummy concoction and I was off to a good start. 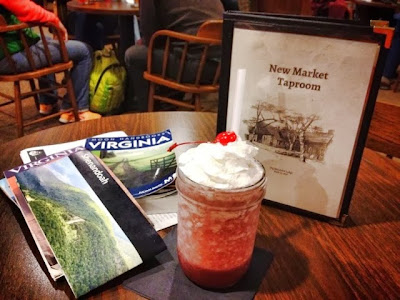 I was really looking forward to having one of these cider drinks.... 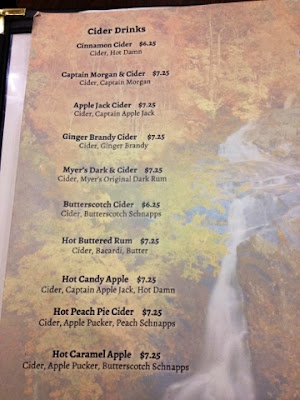 50 minutes later I still had my 1st empty drink sitting in front of me and hadn't had my food order taken. So I left. Probably just as well, I couldn't find the trail in the dark and the roads were a bit scary to walk. I eventually found the CG again, lit a jar candle for warmth and light, made myself another drink and was asleep soon after.


The lights on the rig are little led lights with a solar-charged battery back.  They are not as obnoxiously bright as they look, this was a long exposure.  You can see my new panel set up next to the picnic table. 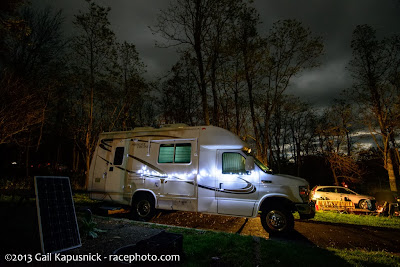