This cruise featured 2 days at sea down and one coming back. This was the first full day at sea. It was still a little too chilly to fully enjoy the decks and balcony.  I spent some of the day exploring the ship. 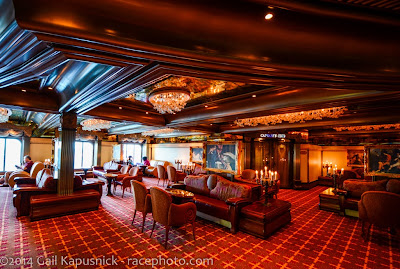 Headed to the Normandie Dining Room for the SeaDay Brunch.  Met a couple folks who I kept running into for the whole cruise. 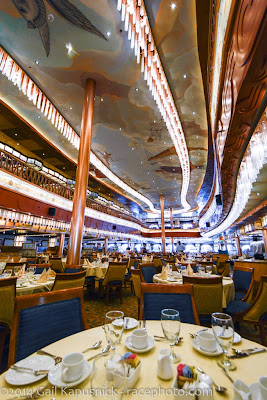 I didn't do the martini tasting :-) 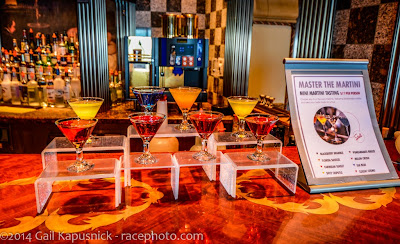 Claw machine for cash. With a view :-) 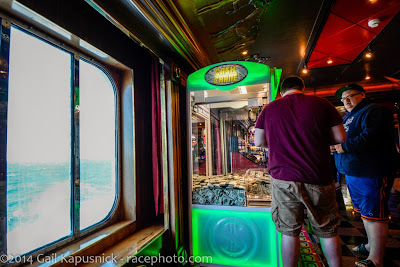 Entrance to Butterflies Lounge. The walls were lined with butterflies. 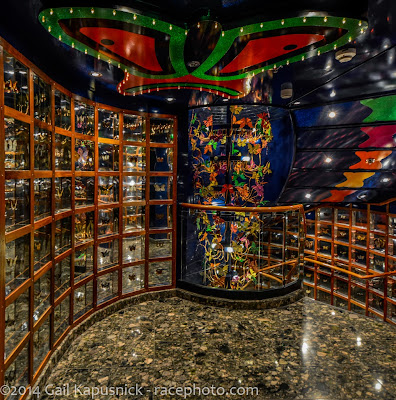 If you'd had a few drinks these steps were kinda dizzying. :-) And since this is a bar.....there were some folks having difficulty. :-) 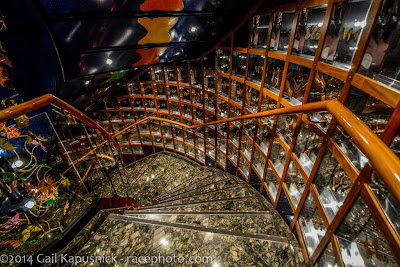 Inside Butterflies Lounge. The stuff on the ceiling didn't really work for me.  This is where they did the Punchliner Comedy Club shows.  Problem is, it was too small.  If you had the late seating at dinner you could not see the first comedian as you needed to be in line 30-45 min prior to get a seat.  Not to mention, I'm not waiting in a 45 min line for anything on vacation.  So I only saw one on the whole cruise. 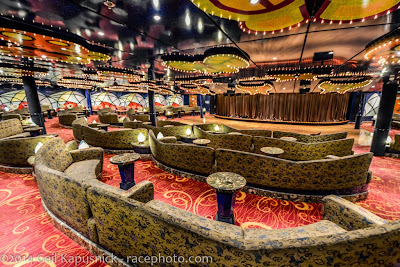 Photographing one of the butterflies on the walls of Butterflies 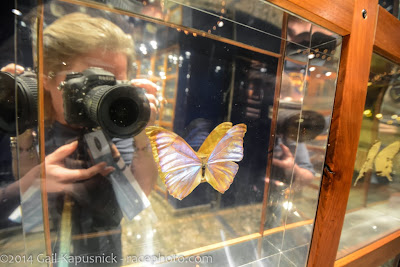 Sunset Promenade. I *loved* this area of the ship. 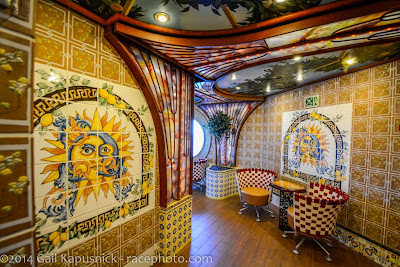 Tables on the Promenade. 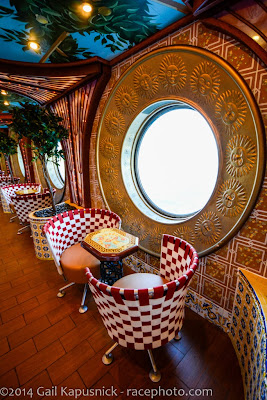 Unfortunately, since it was very close to the kids area, within a few days it was 'discovered' and became a teenager hangout. 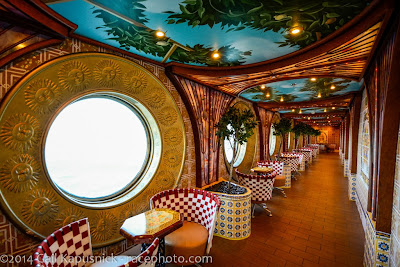 I decided to grab some lunch snacks & return to my cabin.

Lunch on my balcony.  One negative about these deck 8 extended balcony cabins was the big overhang from the Lido deck blocked a LOT of the sky.  And the noise......my god, the noise was awful.  This cabin, 8161, was right under a section with no carpeting and the dragging and scraping of chairs and tables was so loud that bits of paint sometimes rained down from the ceiling.  I hadn't noticed much the first day, I think because it was cold & folks were tired.....and I'd had a fair amount of wine.  But by this time I was beginning to realize I'd been sold a bad cabin. 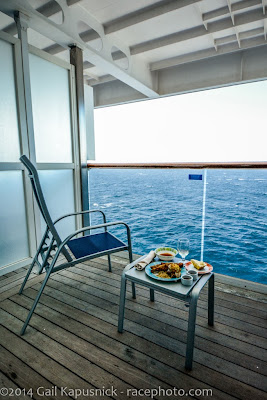 It was a quiet day.  (Well, other than the noise from above!)  I spent some time reading and working on computer stuff, and just watching the ocean go by.  Took a little nap too.  :-)

View from the room. The extended balcony really kind of impeded the water view, and the even more extended roof cut off some of the sky view. I would not pay the extra for this again. Regular balcony was fine outside and better when in the cabin. 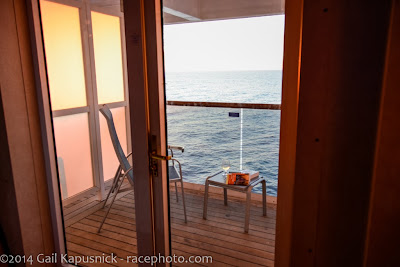 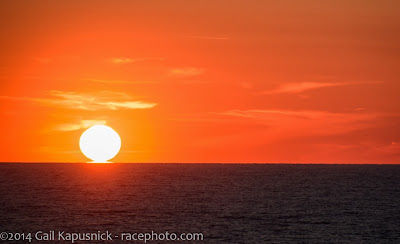 That extended roof blocked a lot of sky. (And sun!) 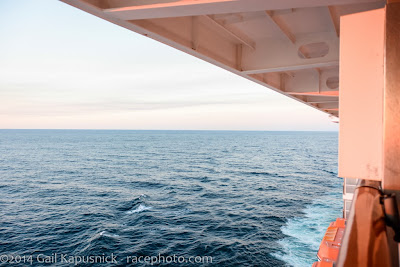 It was still chilly enough to need a jacket to sit out there. 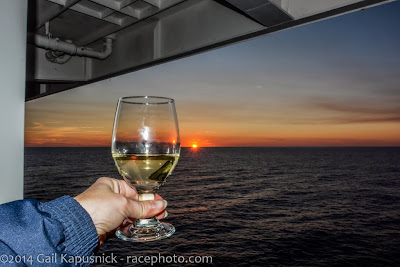 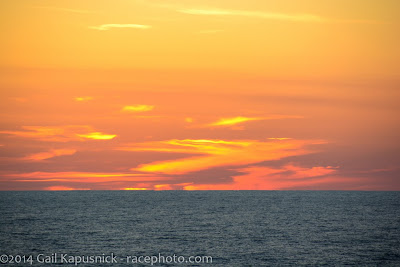 After sunset I got dressed and wandered downstairs.  It was the first formal night so I was looking forward to lobster again!  :-)

Picked up an appetizer from the Taste Bar 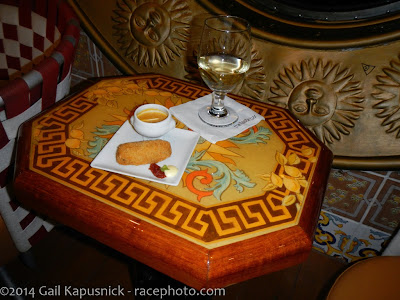 I went to the show and to be honest, left about halfway through.  It was not my cup of tea.  The only bit I really enjoyed was a bit of Yellow Submarine where the dancers were dancing in flippers.  I can't even walk in them so that was impressive.

Since I left the show early I headed towards the dining room and was astounded to find a couple hundred people standing in line!  And nowhere to sit.  Wow......I made a mental note to not do that again LOL

Upon entering the dining room and heading to my table, I couldn't believe my eyes.  There was Karen from the Steakhouse the night before!  What were the odds on that one??  We both burst out laughing.  Too funny!  Also at the table were Rob from Delaware, and Miss Sally, who unfortunately had dined alone the previous night since none of us made it to the main dining room the first night.  I was surprised to see the menu was just appetizer & main course, the last cruise I was on had appetizers, soup, salad & main course.  Of course you could get more than one appetizer if you wanted.  The food and service were a bit meh....and the coffee was abysmal.  Old and burnt, looked like 11am gas station coffee.  Flat gray when you added cream.  Yuck.  However, the company was fun, and the chocolate melting cake was wonderful.  :-)

After dinner I sat in the Atrium Bar for a bit listening to Skot Bradley who I really enjoyed.  Headed up to the room and listed to the chairs scrape around overhead.  Definitely made it harder to fall asleep.