While it has nothing to do with RVing, (well, maybe a little, which I'll get into one day when I talk about how I decided to RV) I want to share some other stuff on this blog too.  It is, after all, all about me.  :-)

I used to do a lot of computer generated art but somehow lost my inspiration for many years.  In the winter  of 2010, Northern Virginia got whacked by "Snowmageddon".  We got about 3' of snow, and I was confined to my house for a few days.  Having nothing to do, I fired up Netflix, and went looking for a show one of my coworkers had been badgering me to check out, Deadliest Catch.  Se said, "With how much you love boats & the ocean, I can't believe you don't watch this!"  I replied, "60 foot freezing waves & 50 mph winds are sooooo not what I love about boats and the ocean!  And I'd probably never want to eat crab again if I watched that.  I think I'll pass."   I'm not a big TV person anyway.  But, having reached the end of the internet, I thought I'd give it a try.  :-)  I did find it strangely entertaining, and before I knew it, I was hooked.  One scene in particular really grabbed me, one of the boats searching for a comrade in distress, with flashing sodium lights on a storm tossed sea.  It made me want to paint again.  As I watched a little more, I was intrigued by one of the characters, Russ Newberry.  He was on Facebook, and on a whim I sent him a friend request.  I was astounded when he accepted.  I was playing around with computer art again, and when he posted a photo of his boat I decided to turn it into a chart-style painting.  I used to do those featuring sailboats but had never added a person to one.  I was pretty happy with the final result. 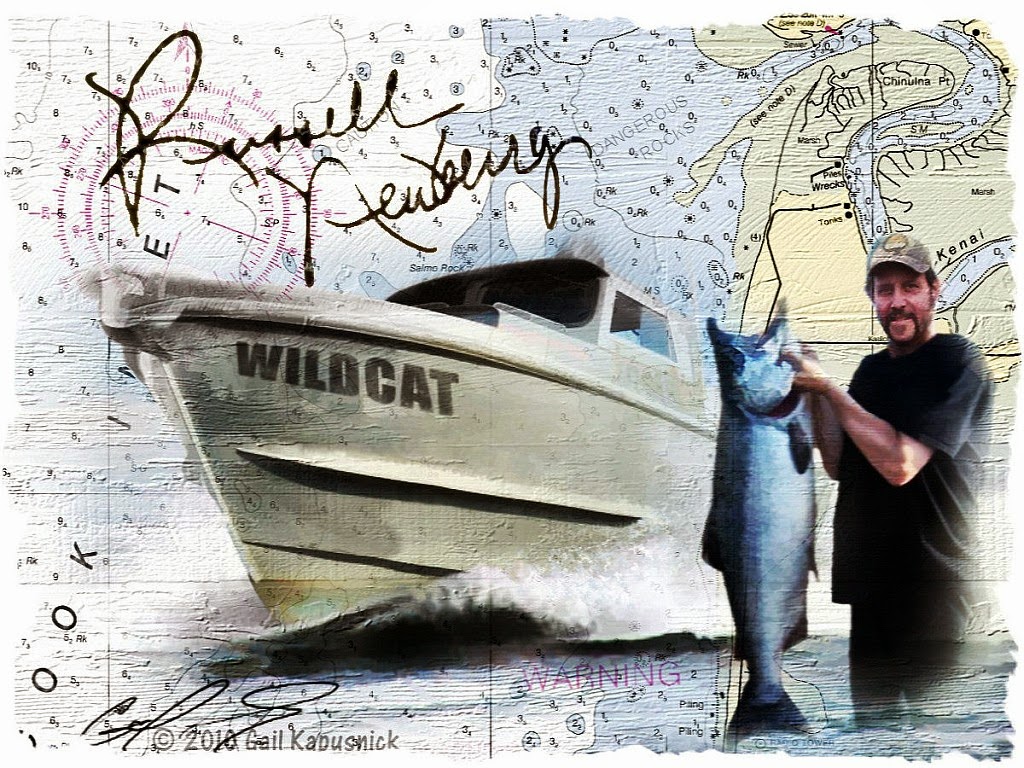 I posted it on Facebook, and Russ loved it.  That spurred me to create more, and a love affair with Deadliest Catch and Alaska fishing was born.