Well, it's one of those things that I knew had to be done.  The batteries were original equipment and they were shot.  They were dated 2008 and wouldn't hold a charge for more than a couple days.  One even had a bit of a bulge.  There's an outfit in Leesburg that just does batteries, Battery Warehouse.  They're good guys, and have a great rep.

I worked till midnight Thursday night, and after working on a few little things, moved the RV over to their lot.  It was almost 2am at that point.  I decided to do it this way as I wanted to be there when they opened, as they get very busy as the day wears on.  And traffic in downtown Leesburg can be miserable. I put up the stealth curtains, had a beer and played Mahjohng until I was finally sleepy, around 3am.  It was a short night's sleep as I had the alarm set for 7am.  I had grand plans of getting breakfast, but instead hit the snooze half a dozen times and finally got up & dressed a little before they opened. 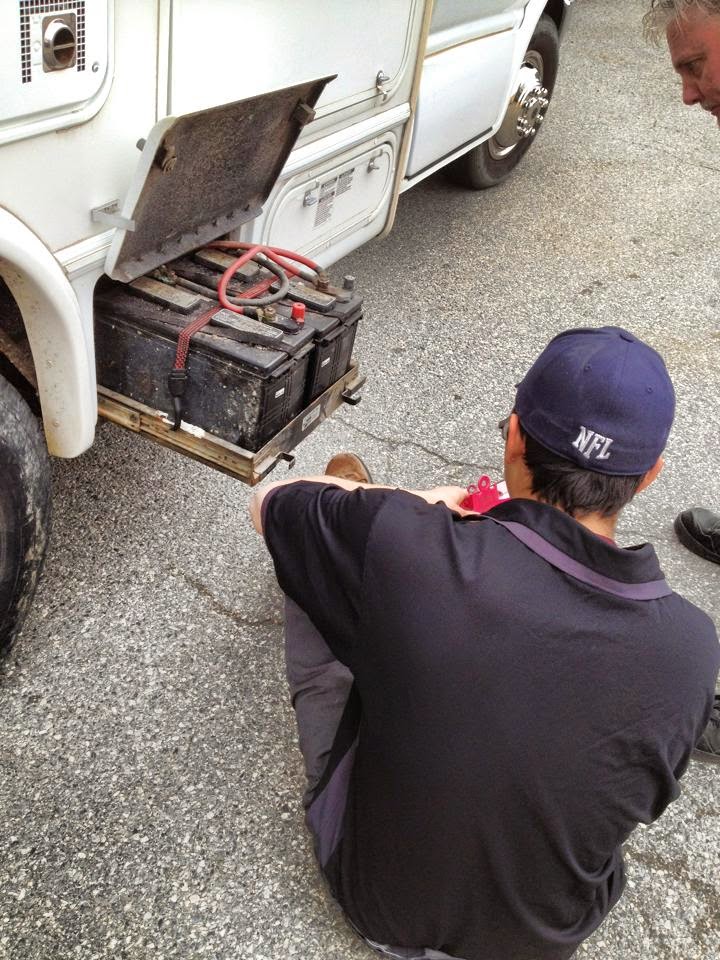 Measuring  the old batteries & figuring out what might fit


We had talked on the phone a bit about my setup.  I had 2 group 27 batteries but I was *really* hoping 2 6v batteries would fit.  They didn't.  I wasn't up for rebuilding the battery compartment, and they don't do that sort of thing anyway, so another pair of group 27's was the best I could do.  Steve gave me a few options and I settled on the midrange Deka DC27.  They get good reviews and are made in PA near where I grew up.  So that's a big plus. 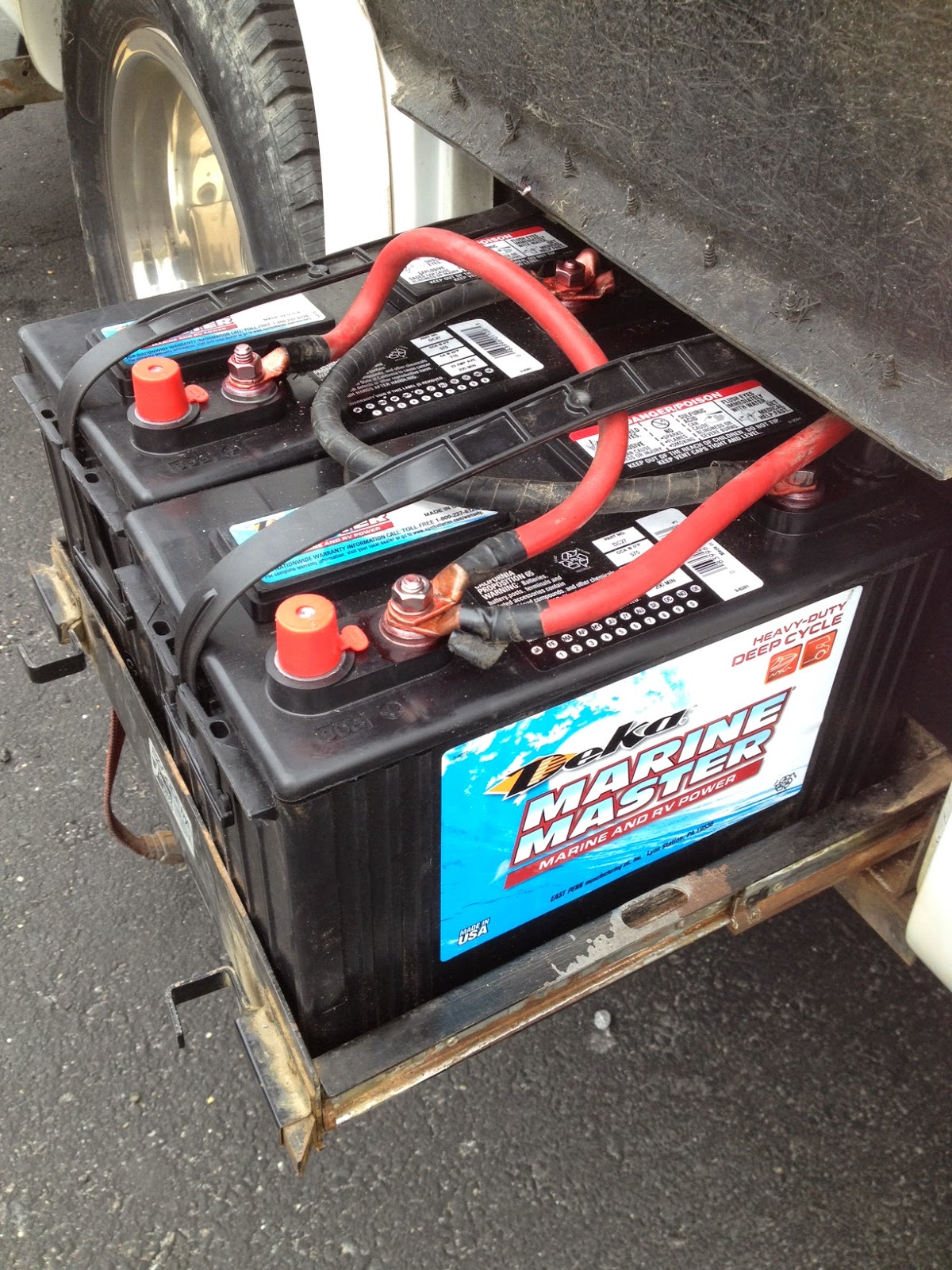 The new batteries, all clean and new

They did a nice job on the install.  There was a lot of corrosion and rust which they cleaned up.  It will be nice not to have to be sooo careful with using any power.  I still won't use much but it will be nice to have a little breathing room.

When they were done the house battery installation, I asked them to check the starting battery.  It had always started just fine, but when I got a new voltage meter that plugged into the 12v outlet, I was unpleasantly surprised to see 12.4 volts.  They hooked up the tester and came back with the report.  I don't remember the exact numbers, but the bottom line was that the battery was a 2008 as well, and probably had about 6 months to live.  I waffled a bit, but had them replace it as well.  I figured I was already there, and the last thing I wanted was to be out in the boondocks on a cold day 6 months from now going, "Crap, I forgot the starting battery was fading."  It was another 100 bucks, cheap peace of mind.

After that was all done, I took the rig back to the storage place and messed around with a few things.  I put up a wineglass holder.  I'm not sure real wineglasses will survive rv life but I'm determined to try.  I played around with a few possible locations but finally went with over the sink. 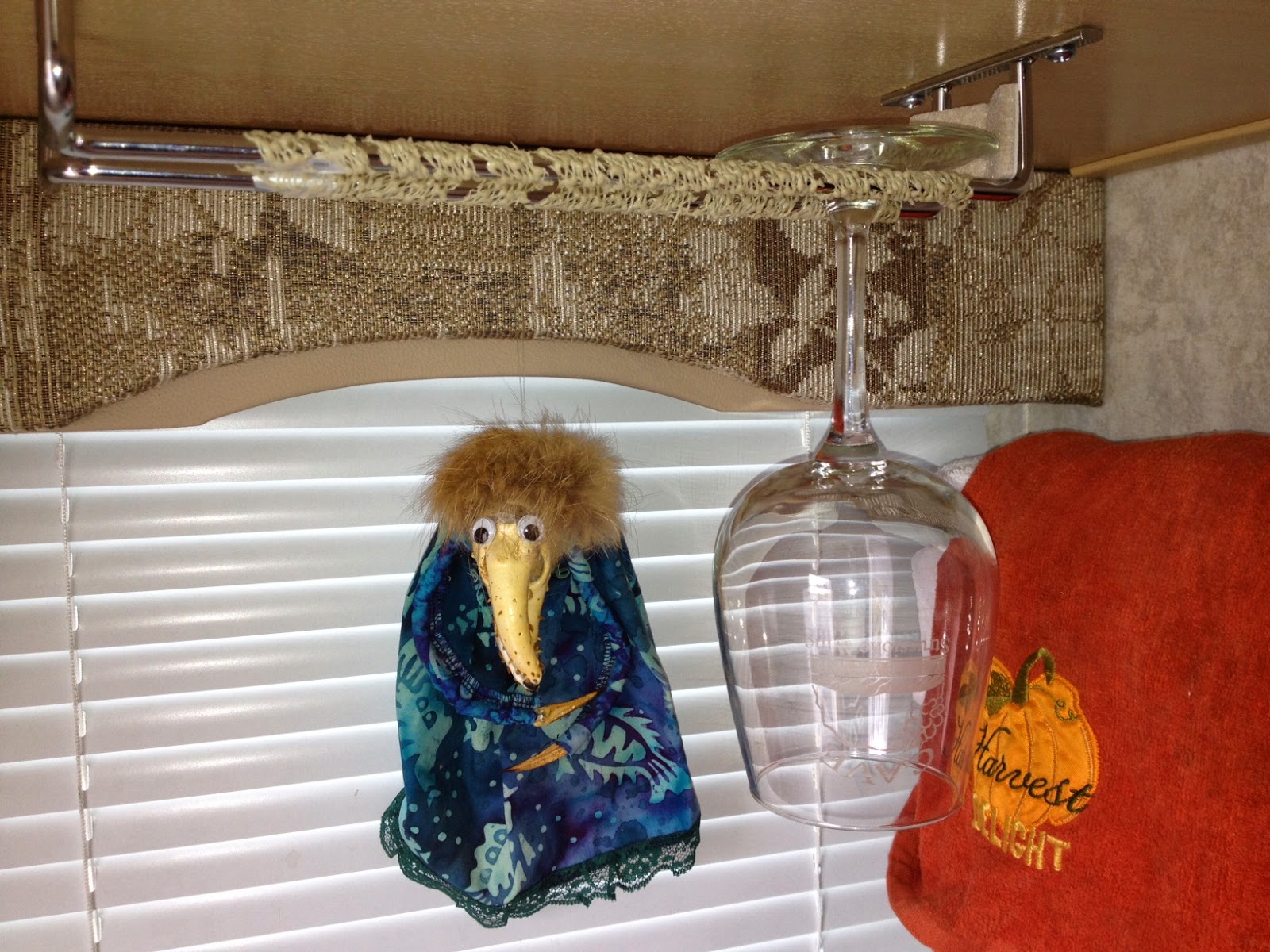 (The little kitchen witch is made from a King Crab claw and was a gift from my friends from Kodiak.)

I added the felt pads to the end & then had the absolutely inspired idea to wrap the rods with a strip cut from shelf liner.  It works great!  I only had one glass onboard but will take another one next time I'm there.  I have a few ideas for how I'll keep the glasses from banging together.  We'll see how they work.

Another cool item I'm in love with is this $15 Walmart table.  It is just about perfect for my space. 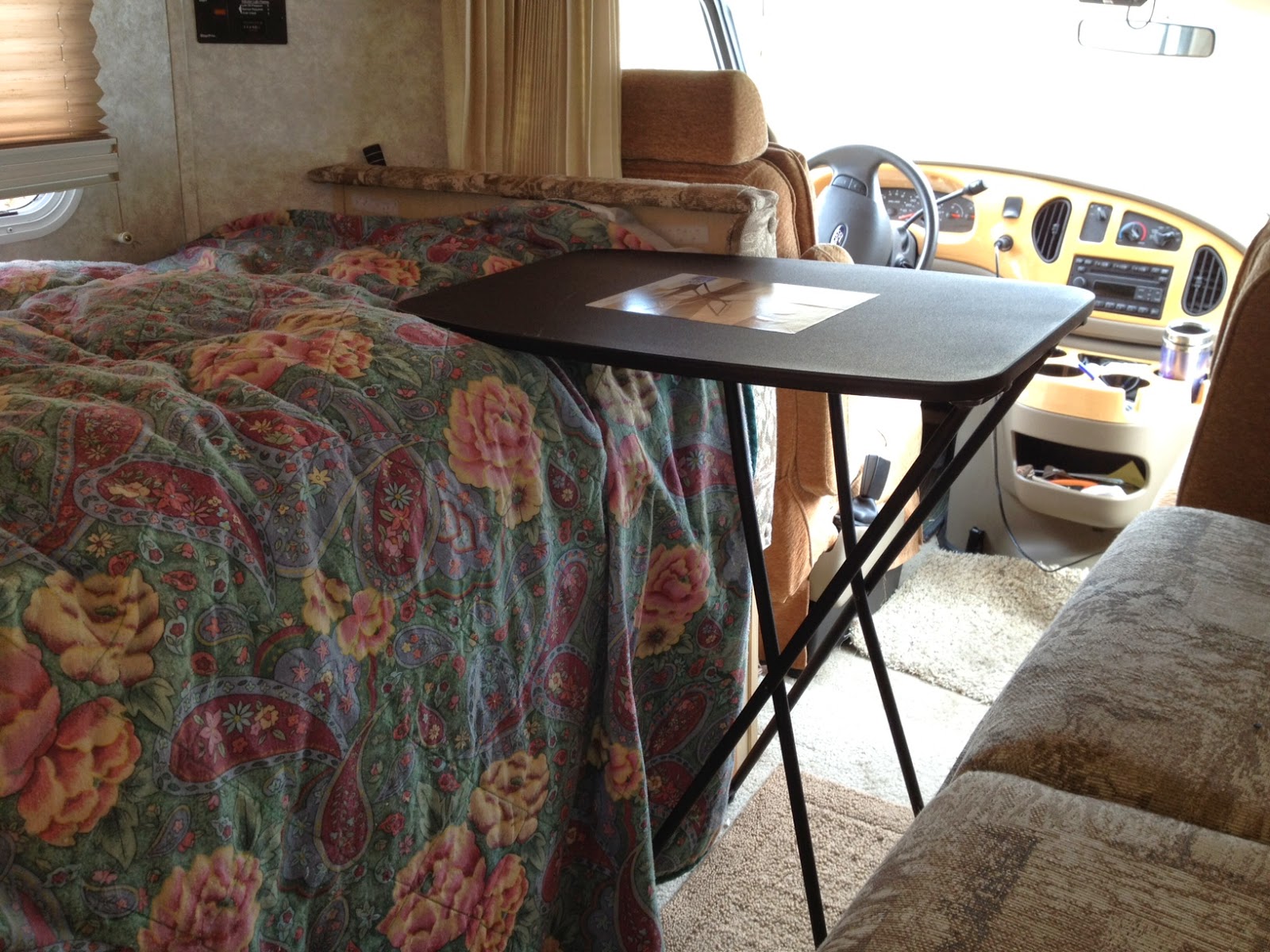 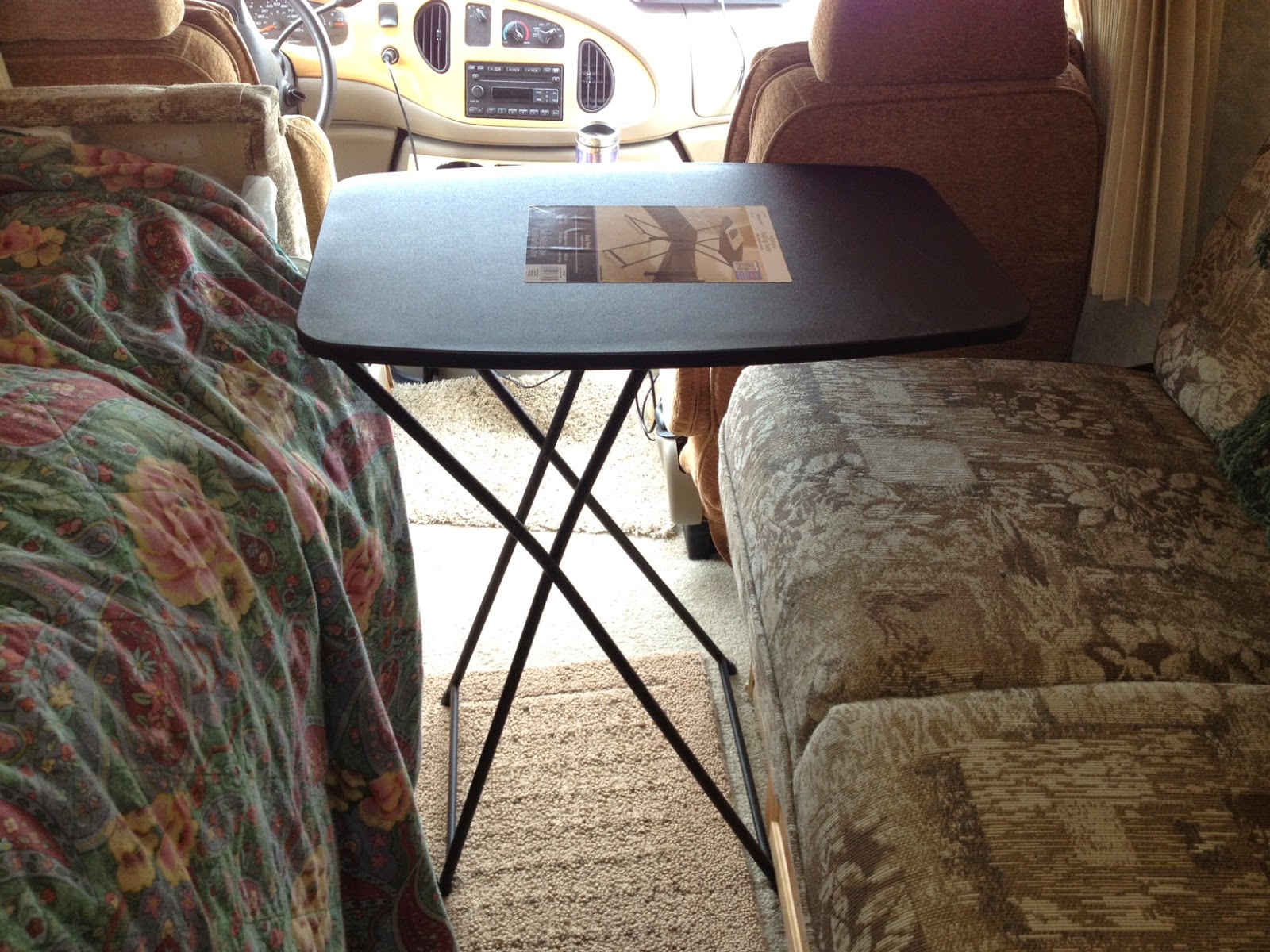 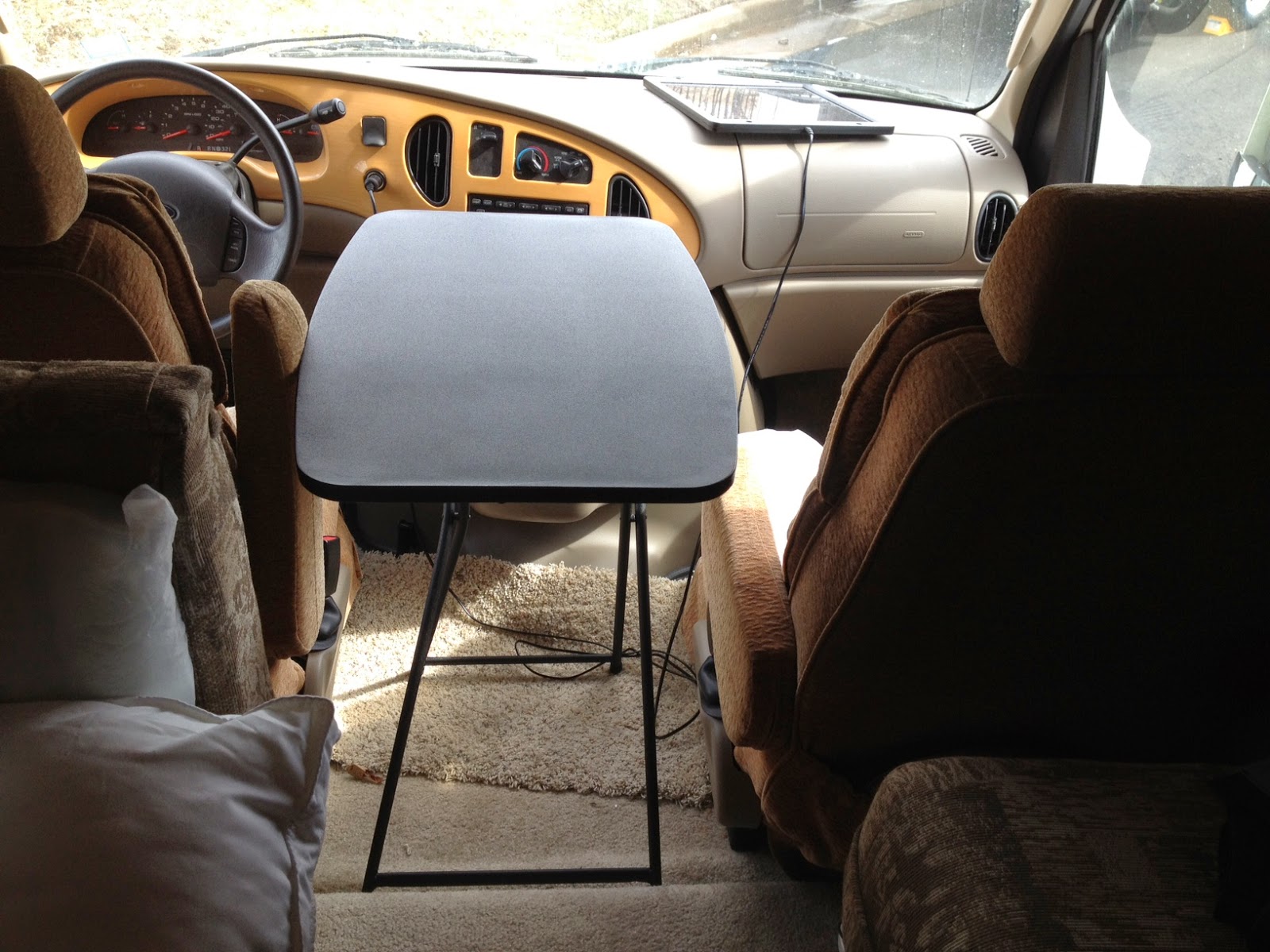 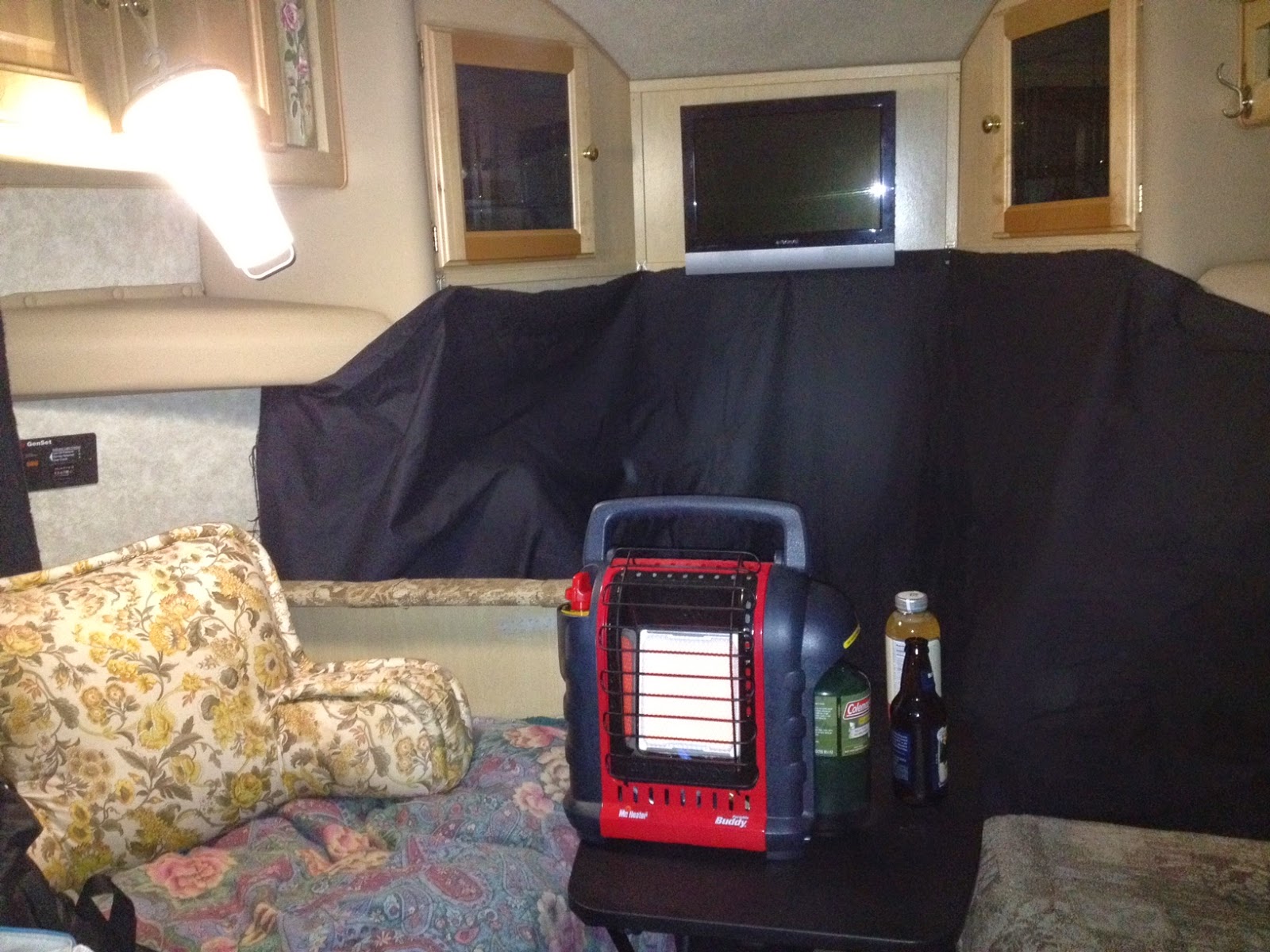 After all of that I needed a nap :-) so I headed home.  I left all the solar panels disconnected so when I go back in a few days I can make sure all the batteries are holding a charge.  And I don't quite trust the battery disconnect, so we'll see if there's some draw even with it in the "Store" position.  I had planned to go camping this weekend but thought I'd be having friends visit.  They didn't make it though.  Ah well.