I get asked about this a lot on FB and in the forums so I think I'll type it once here.  :-)  I've updated this post as I've changed equipment and preferences over the past year and the post was buried. If you click on links in here, in theory Amazon throws me a couple bucks if you buy.

I am a very light electrical user.  I don't watch much TV, I try to camp in climates where I don't use heat or ac and I use led lights as much as possible.
Speaking of LED, this lantern right here is the greatest thing since sliced bread.  It is perfect for me. I have a few of them.

Ivation Super-Bright 16-LED Dimmable Rechargeable Lantern Light / Table Lamp With Hanging Hook
It weighs nothing, and is bright enough to read by.  The hanging hook is a bit flimsy but c'est la vie. Be gentle with it.  I have a small bungee (I have a lot of bungees) that I use to hang it from the AC unit sometimes, or from the overhead cabinet knob above me when reading.  The dimming feature is sweet.  I'm working on converting all the house lights to LED but it's going slower than I'd like.

I have a Phoenix Cruiser 21' motorhome with 2 group 24 batteries that I replaced in April 2014.  The big things I need power for are the fridge, which uses electricity even when on propane, and charging laptops, phones, tablets and camera.  If I'm driving, I plug everything in and try to charge as much as possible while the engine is running anyway.  When I'm camped I have the most basic portable solar setup imaginable.  I started out with the 45watt Harbor Freight kit because I didn't know any better.  The panels work but they're old technology and they're heavier and less efficient than new ones.  And not sturdy.  The plastic frame cracked the first tie I used them and the hardware all rusted that first weekend too.  Back they went.  However, they did work, and I went looking for a better option.

I ended up with a Renogy 100watt panel from Amazon.

This kit puts out over twice the power for the same price as the Harbor Freight one, and weighs half as much.  This panel weighs 16 pounds so it's no problem to move.
I actually bought the panel, cables, connectors, and controller separately but this is a better deal.  I also screwed up and bought a 10A controller which left no room for expansion.  The kit above has a 30A which will allow another panel or two down the road. 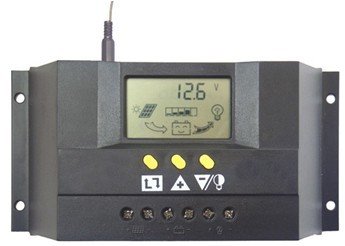 Having the display is nice.

I chose to not mount my panel on the roof.
First, I didn't want to climb up there.
Second, I like shade.  Solar panels like sun.  We each need our own space.  :-) 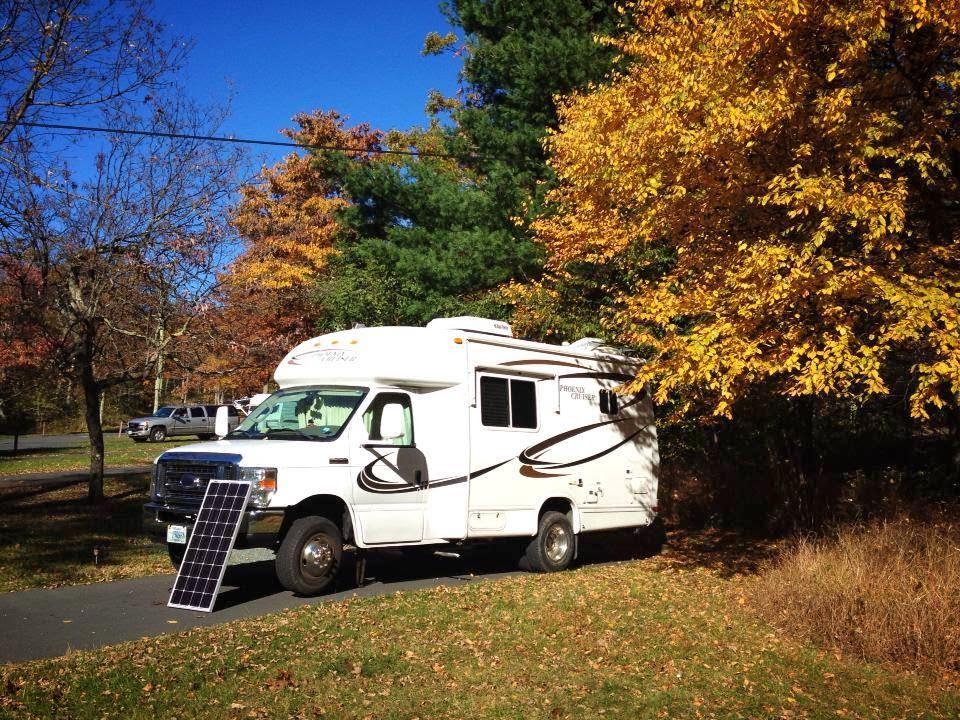 I can park in the shade and put the panel in the sun.  Yes, there's a possibility of theft.  If I ever decide that's a real concern I'll use a cable lock to attach it to whatever I'm leaning it up against. Or I'll move.  Who wants to park somewhere where you're worried about theft?  Right now I just use a bungee so an errant gust of wind won't blow it over. In this case I got to this CG in the afternoon and just set the panel up against the grill.  At sundown I turned it the other way and propped it up against the picnic table since the rig would be in the shade at sunrise.  Yeah, it's a bit more difficult than set-it-and-forget-it on the roof, but I sooo much prefer being in shade if it's available that it's worth it.  I plan to eventually mount one permanently on the roof at some point too.  Then if there's no shade I can just use that, or use both if I need more juice.

I bought all my components separately, which meant installing MC4 connectors on my cables and controller since that's what's on the solar panel.  This was a pain for someone like me who is new to all this. But even I did it.  Just buy the kit though, it's less than buying the parts and no screwing around.  :-) 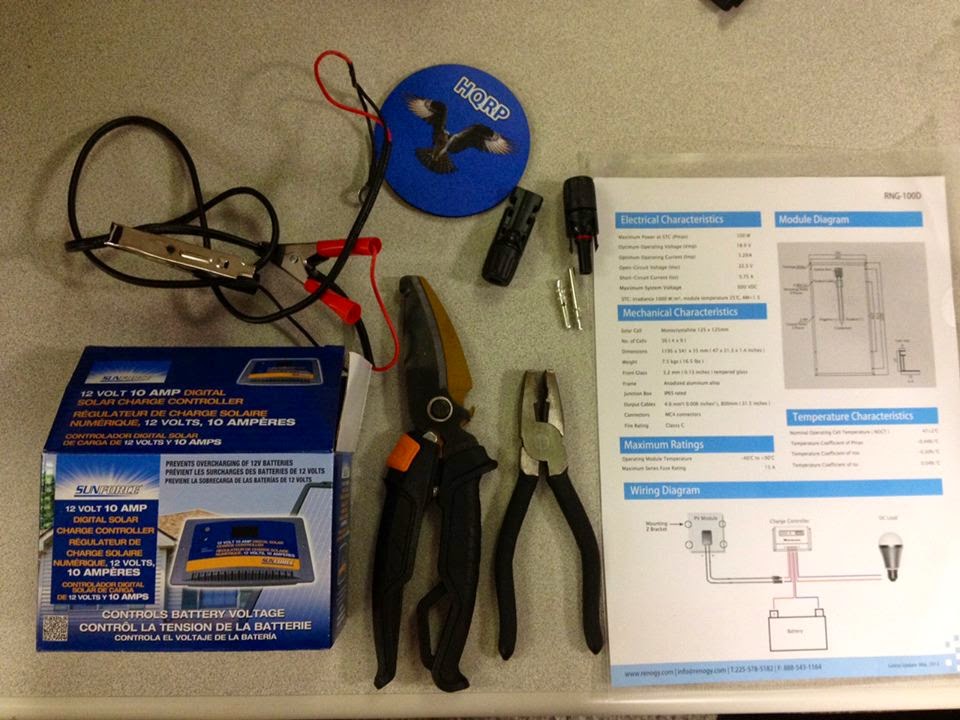 (As noted above, I recently replaced this SunForce controller)

The panel connects to the controller with cables and MC4 connectors.  These connectors are made to NOT come apart easily, and they don't.  In fact, you need a special tool to disconnect them.  It's cheap but it's one more thing to carry, store and lose so that didn't work for me.  I filed off most of the barbs on the male ends that lock the connectors together, and  made sure what was left was rounded.  They still lock but a good pull will disconnect them.  Like any connection, pull on the connectors, not the wire.  If you try this and don't file enough and they won't disconnect, two thin bladed screwdrives will probably get the tabs depressed enough to get them apart.  I attached the alligator clips you see above to the output of the controller and just clip them to the battery for now. One of theses days I'll install that permanently but for now it works just fine.  I had the clips left over from another charger or some other 12v thingy but you can get them at any auto parts store or from Amazon as well.
The controller is not waterproof so it sits in the battery compartment with the batteries.


I keep the panels on the ladder rack and leave it connected to the batteries.  This kept them fully charged even in the Virginia miserable winters, and I had battery power when I went there to work on it or take it out for a day or whatever. 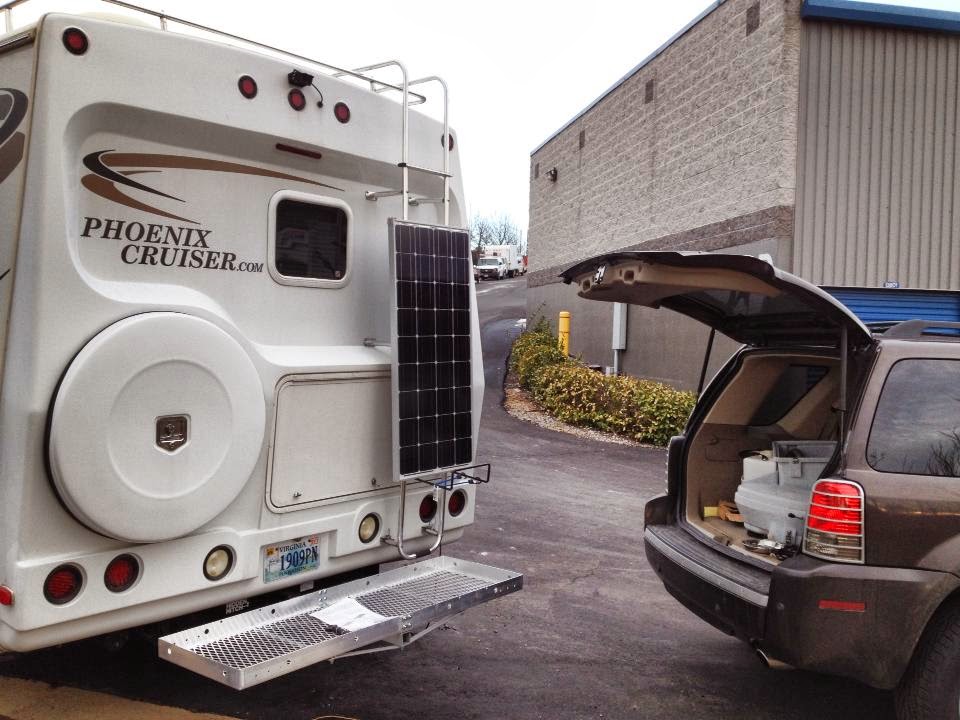 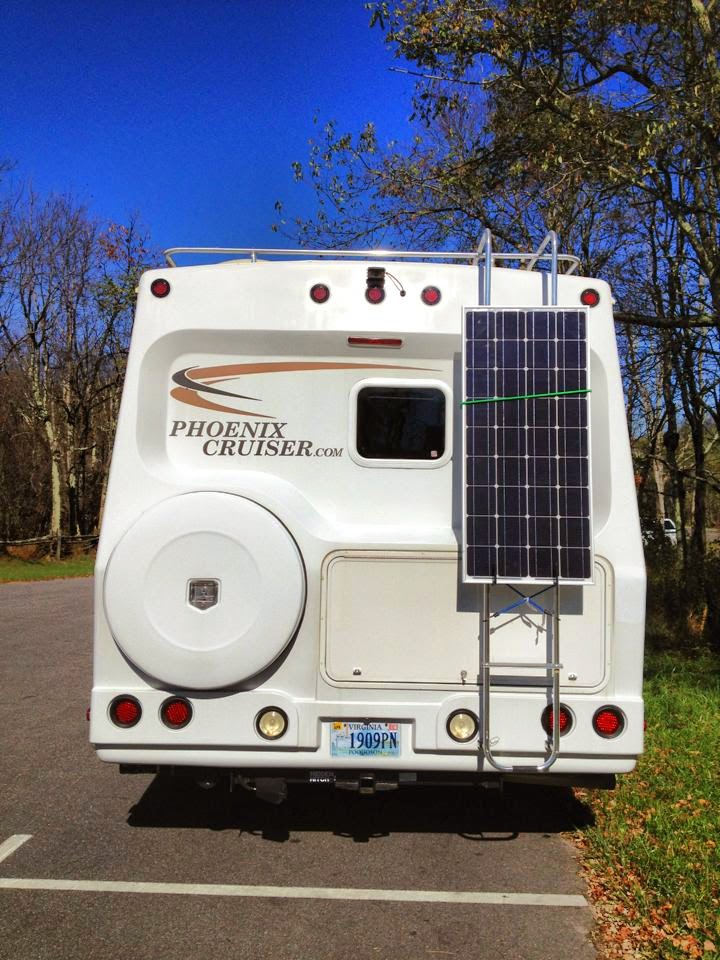 I would keep it behind the seat at first but no longer do that. 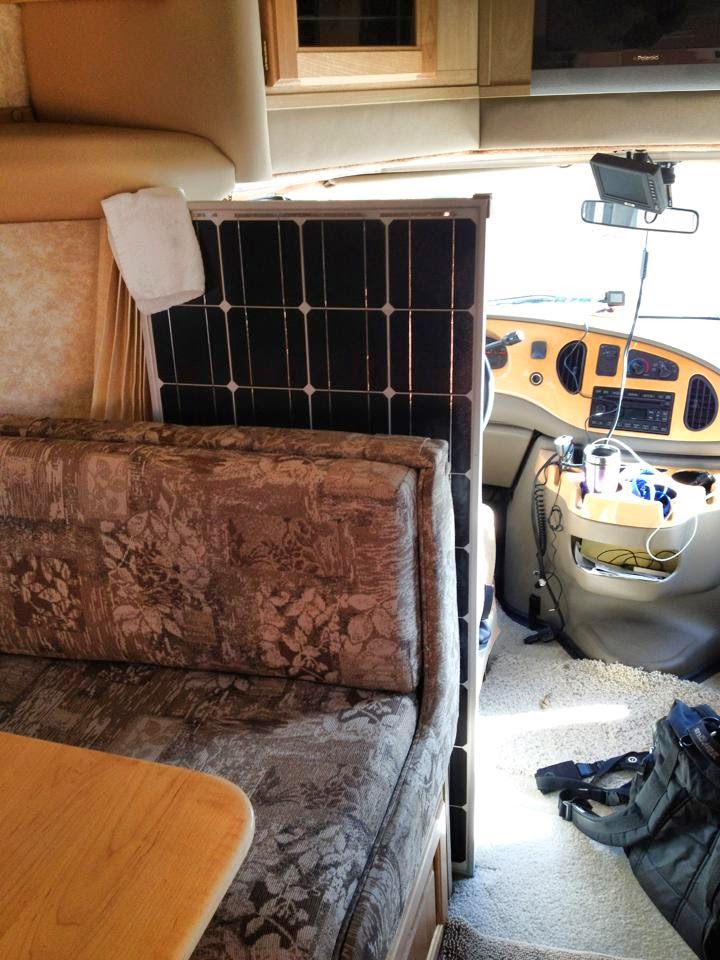 I went back to carrying the panels on the ladder.  I attached keyrings to the back of the panel which makes attaching the bungees a LOT easier than trying to force the hooks through the holes in the frame.  And I'm down to 3 bungees.  It takes 2 minutes now and I'm not dragging sand & spiders inside. 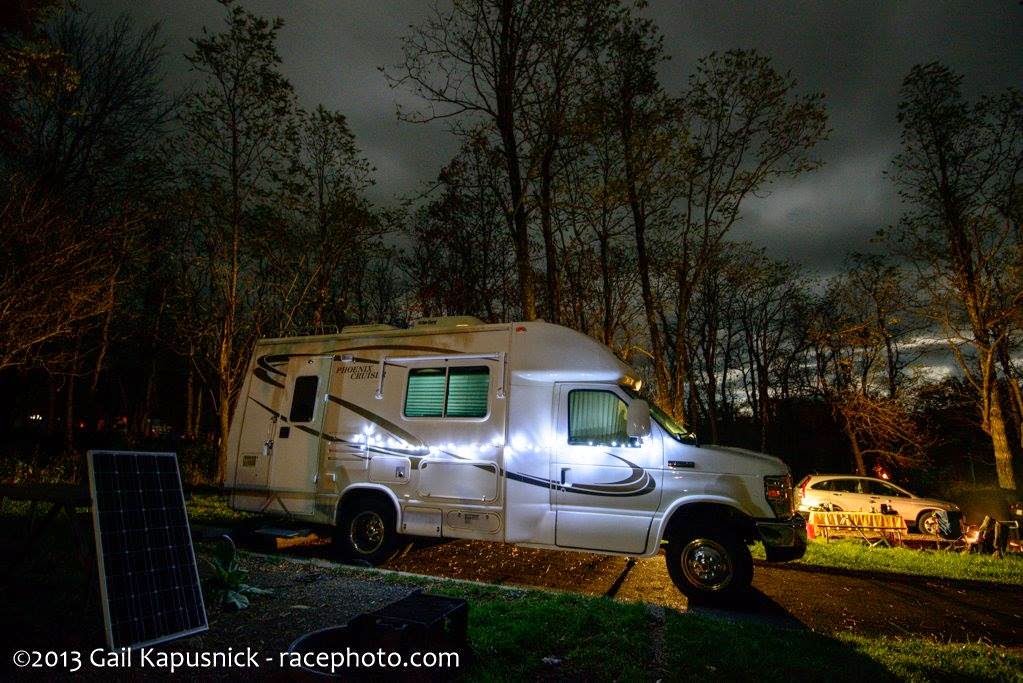 Of course it's dark in this pic, but you can see the panel set up, poised to catch the rising sun.  I know it sounds like a giant hassle to set up but it really isn't.  After the first couple times where I was still figuring out where everything went, it takes only moments.  The longest process is untangling the cables if I was lazy stowing them.  It's quite the conversation starter too, as everyone who walks by will ask you about them.  This may or may not be a good thing.  :-)  All these campground photos were taken in Shenandoah National Park, Fall 2013.

In July 2014 I added 2 flexible 100w Renogy panels. They were $215 each. While I LOVE the weight, they are dirt magnets and the dust adheres to the the plastic like it's glued on.  It can't be easily brushed or blown off, I need to wash them. The glass panels are much easier to keep clean. Also, the plastic ones do not put out as much power. The technology still needs work.  However, you can get 4  or 5 of them for the same weight as one glass panel so for portable setups it is a great option.

An update after a year of using the flex panels......I have found them to be very useful. While they don't put out the same power as the glass ones IN FULL SUN, they put out power if part of the panel is shaded, or even all of it is. Not much mind you, but something is usually better than nothing. And the fact that they weigh noting is a huge benefit. When I headed west in May 2015, I left the glass panel in FL and took 3 flex panels instead. Which weigh less combined than the one glass one. 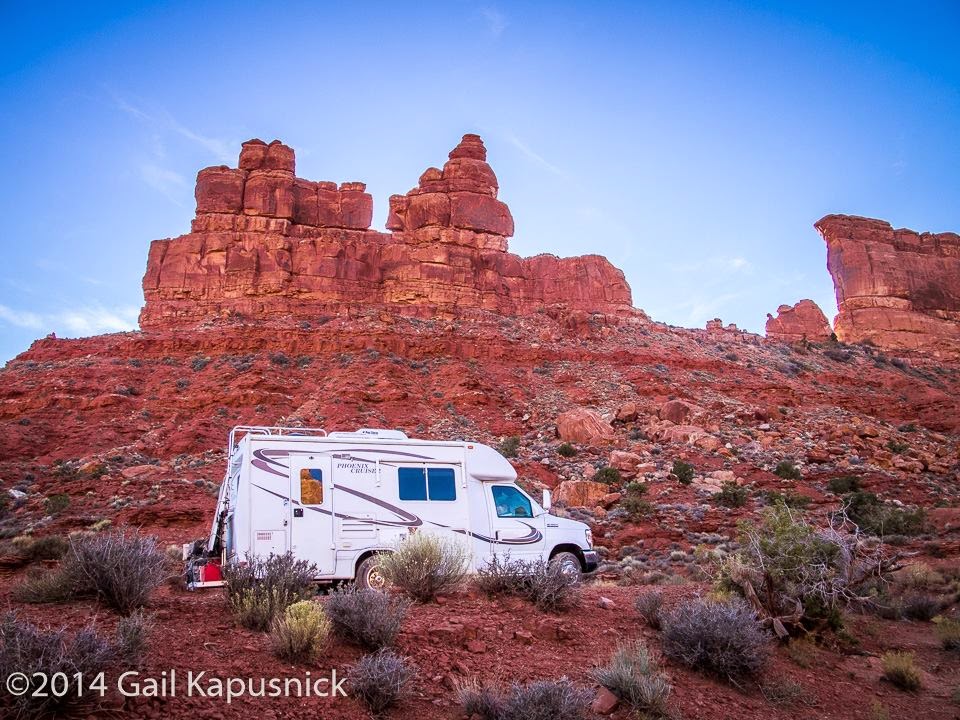 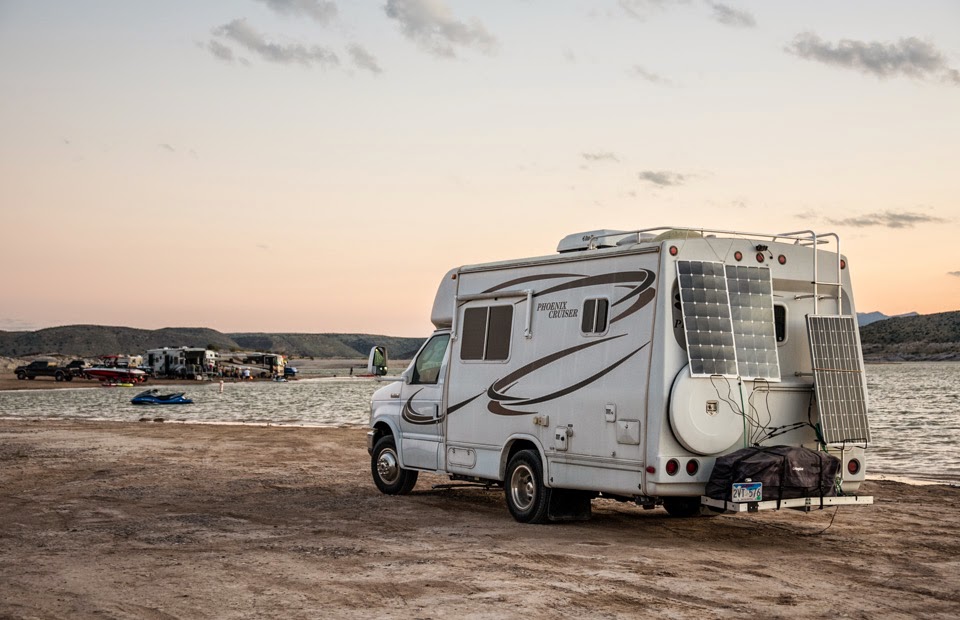 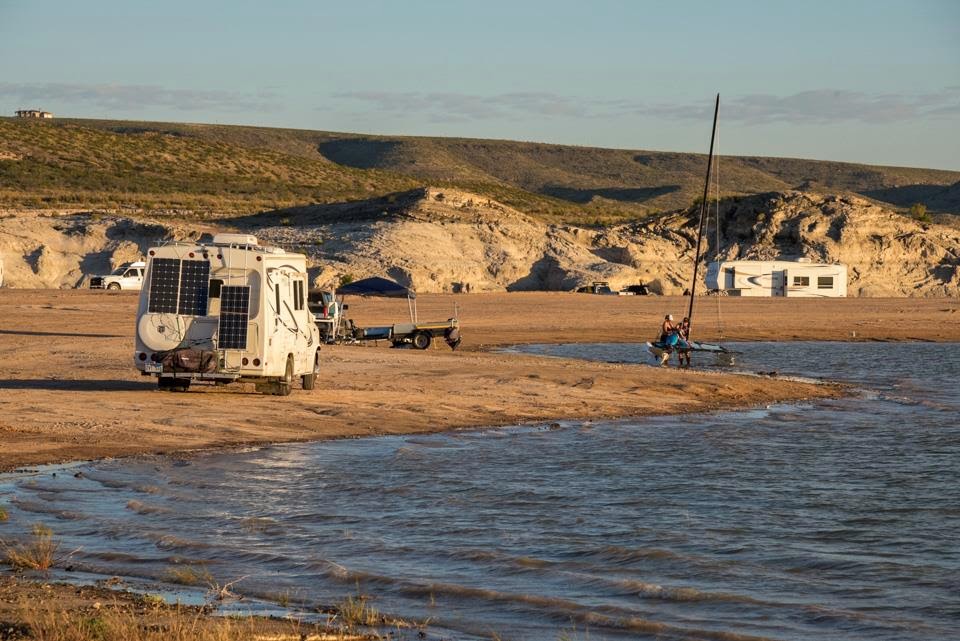 When I was out west there was no shade and I just tried  to park so the panels were in the sun. It's not a great angle for maximum wattage but I was driving almost every other day so I didn't need it.


Now, to the usage.  I have a 2000w whole house inverter built into the rig that I seldom use.  It works great but draws a lot of amps just sitting there.  No bueno.  I use it for the TV and that's about it.  OR if I'm driving, I have that on & plug lots of stuff in to charge. When parked,  I have one 12v socket that is wired to the house batteries.  These are generally fused at 10A so one should not attempt to draw more than 100w.  I do NOT want to blow that fuse as god alone knows where it is but I guarantee it's a struggle to get to.  That said, I lived on the edge for a long and used this inverter:

I've had it for a few years and used it in my car before I got the RV and never blew a fuse.  It claims less than 1A resting current draw.  It runs my laptop and Nikon battery charger just fine.  I have yet to draw over 60w with those.  You could certainly get a smaller one cheaper.  This one will power stuff like drills, etc, you just have to connect directly to a battery for that.  (As of 2/15 I plan to use this inverter to power some stuff on a lot I bought in FL and bought a smaller pure sine for the rig.)  I do plan to add another house 12v outlet at some point as well. They're handy.

I recently bought a pure sine inverter as, believe it or not, Sonicare toothbrushes require pure sine power. Who knew? :-)  This is the one I went with.
Wagan Elite Inverter