It was a pretty sucky drive from Cameron to Pass Christian. I woke up surrounded by trucks belonging to all the fly fishermen.  I had enough room to get out easily......until one last goober shoehorned in alongside. Sigh......  I was able to get out though it was a struggle. 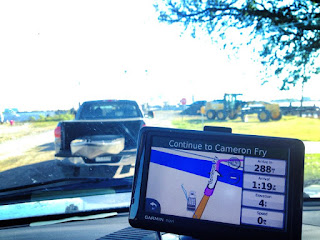 So I got on the ferry and as I was pulling on to the boat a crewman jumped in front and waved me to turn right. So I did. And promptly hit a corner of the ramp. Thanks, jackass.Well, in retrospect, it might now have been 100% his fault, I think either the boat or ramp may have shifted. It was a pretty half-assed operation with the loading ramp attached to a sunken barge.  Anyway, when I got parked the guy said, "Oh it's ok, you didn't break anything!" I was skeptical as I had heard metal scraping.  Looking at the side however, I didn't see any real damage. The carpet was torn off the step and there was a bit of broken plastic next to it. So I thought the step took the brunt of it. I would turn out to be wrong, but I didn't find that out for another 2 weeks.  I was pissed, but happy it wasn't worse. The step wasn't damaged, it still worked fine.  So off I continued eastbound. It was all familiar territory, shit road through Baton Rouge and New Orleans. Finally I arrived at the payoff, Pass Christian MS. I headed immediately to the restaurant and enjoyed the best shrimp po boy ever.

There's one beach parking lot that allows overnight parking. One night only. It's small and you're not really allowed to take up more than one spot.  The last spot is bigger so I could angle into it. I could have done a litle better but there was no one there so I took the lazy way out. (I also didn't really want anyone parking right next to me like everyone wants to do.)  I enjoyed a quiet  night, except for 2 or 3 cars pulling in at 3am and having a little powwow. I wasn't thrilled about that but no one approached me. 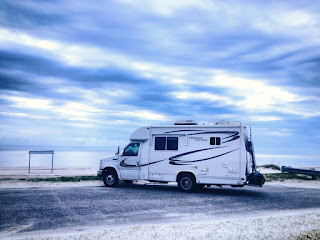