It's been a roller coaster for sure. I got the septic inspection for the place on No Name Rd on Monday. The guy opened the lid, took one look at it, and told me (First words out of his mouth) "The tank is failed."  It was one big, cracked, rooted mess. On top of that, the tank is right next to the property line. This may have been ok when it was put in in the 70's (septic guy's guess) but it's not ok now.  Now it has to be 5' away from the line. Not to mention other distances from the foundation, potable water lines, etc. It would be highly, highly unlikely they would issue a repair permit for it where it is, a new system would have to be installed somewhere else. And the only spot that would comply with all the setback requirements (canal, lake, their well, adjacent wells, property lines, potable water lines) would be......under the existing structure.  So, the choices are, A. limp along with the current one and be very careful with water use, etc. B. Rip out the structures and put in a new tank.  Rip out and relocate the well pump, water lines and palm tree and put it there and I'm not even sure that would comply.  Hard to know for sure without the survey and thankfully I hadn't already shelled out the $700 for that.  But the septic guy said "If you could move it five feet from the property line you'd be ok, but then it's too close to the house.  C. Try to get a variance and easement to replace it in the current spot. This would cost thousands and take years if happened at all. They're not exactly consumer friendly in this county. If you're not a big developer they're not interested in helping.  D. Try to get someone to do the work without a permit. I have no idea how feasible that would be but then when I go to sell the first question is, hey, where's the permit for this new system?  Any way you look at it, there would be significant money, time and headaches involved. 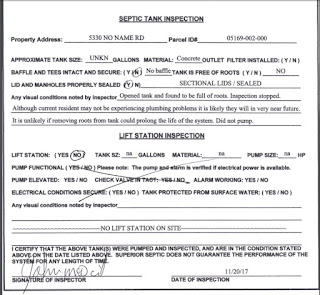 Anyway, when I got that report I advised the realtor that I was cancelling the contract. Thank god I had the inspection contingencies.  Within hours, the sellers advised me they were willing to make a significant price concession if I would accept the property as-is. Well, I gave it some thought. I wasn't planning to build on the property any time soon, if ever. (Since the whole lot is in a flood zone any new structure has to be at an 8 foot elevation so that's a whole 'nother can of worms....)  I currently have a composting toilet in the RV and I could put one in the house. I'm good at managing that and graywater so I could do it in the house too. Though one reason for BUYING something with a house on it was so I could take a shower without worry, just flush my toilet like a normal person, not have to throw my TP in the trash, and wash clothes without using a laundromat. I suspect that's why there's no W/D in it now. The current owners never lived there but the ones before them did. I bet they were babying that tank too. Why else would you not have a washer and dryer??  Anyway, after weighing it for a bit, I decided that I did love the place and I could live with the composting toilet option.  I told the sellers I would take their offer.

I went back to the property yesterday to double check a few things, measure the fences, etc. Turns out the fence between them and the rear neighbor IS on the property line so the tank is too close. What I didn't expect to find is that the fence between them and the neighbor across the road is way OUTSIDE the property line. It's a dead end street but the street right-of-way goes all the way to the water's edge. It belongs to the county. Nobody may be using it but you still can't just fence it in and use it. Once again....no permit. The well may even be in that right of way, it's certainly close. Once again, it would take a survey to know for sure. I learned a few more things that concerned me.....no one ever went through the process to de-title the trailer and convert it to real property. (permits, fees and taxes involved there) AND the sellers never got title to it. :-( You have to do one or the other.  Sigh.......the person that sold it to them is dead so now there's more headaches involved, as the title insurance company won't insure without that. I heard that directly from the title insurance company. I guess when they bought it, they bought it from a sick close friend for a pittance and never did any of that. No title insurance, simple quitclaim deed, no survey, etc. Maybe trying to save $$, I don't know.  That may come back to bite them now.

While I was at the property I looked more closely at the construction of the addition. Pressing my hand to the wall I was astonished to find that what I thought was beadboard paneling over drywall turned out to be plastic panels over plain, unbacked styrofoam. I don't know how that would react in a fire but I don't think it would be good. The uncovered styro I could see in the bathroom where the back of the vanity had disintegrated had no markings to indicate it was fire resistant or anything other than the plain styro you get at Hobby Lobby. I also noticed that the skirting in the back was bowed.......like the trailer had subsided a bit. Also, a tree had fallen on the roof and punched one hole I could see and put a big dent on the roof. Now that I knew the panels were plastic and wouldn't show signs of water damage I was a little more worried about that.

In any event, I had measured the appliances that needed to be replaced so I went back home to wait for the sellers to sign the paperwork. And wait. And wait. I was wondering what was taking so long since they were the ones who made the offer to me. I woke up the next morning and nothing. An hour or two later I got the news I had been expecting....the sellers were backing out of the deal. Sigh. I guess I was expected to counter, but I was frankly done. I had told the realtor that I absolutely wasn't paying a penny more, and I meant what I said. It's a shame, it's a pretty lot, but the fact that it's in the 8' flood zone with a failed septic means that anyone trying to build on it will incur thousands in extra costs and extreme difficulty in getting homeowners insurance. Since I didn't plan to build it wasn't as big a deal for me, but it would have made it a struggle to sell down the road.
Posted by Gail at 5:02 PM