Ok, so I'm not much of a morning person.  I woke up, dragged myself out of my cozy bed with difficulty, and headed right down to the Escapees as the Christians were making us Biscuits & Gravy for breakfast.  :-)  I stopped at the Solos base and we descended upon the Christians like a plague of hungry locusts.  :-)  They had a nice setup, not just the B&G but also a nice egg casserole that had been baked in big Dutch Ovens.  Good stuff.  Oh, and coffee.  Lots of coffee.   It was fun and they were nice people.  Everyone loves my butterfly stool.  I must have gotten asked 100 times where I got it.

After breakfast I headed back to the rig to shower & clean up a bit.  While I was having some more coffee I broke out a little gadget that Mom got me for Christmas. It's a vibration speaker.  (I would shop around, it shows up on Daily Deal sites for less sometimes, and there are also other makes/models to be had.  This is the one I have, however.)  It works surprisingly well for what it is.  I plugged in my iPod, set the vibrator (sounds bad I know :-) on the coffee cup, and instant music with no battery draw.  Don't get me wrong, it's no Bose, and it's not going rock the house.  But for a little background music, it worked surprisingly well.  I played with it a bit, and found that removing the lid from the cup and then setting one edge of the cup on the iPod made a difference.  Much more resonance.  Downside was, the instant I opened the door  it fell over.  It's a paper cup.  Breezes are not its friend.  :-) 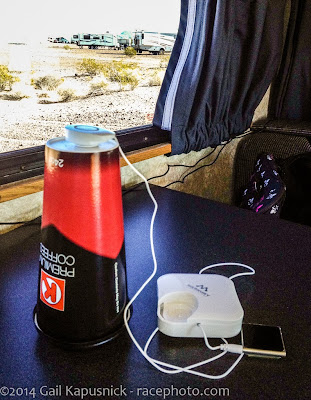 Over breakfast Rita had asked if I wanted to ride into Q with her.  She needed to dump & fill & do a little shopping.  I said "Sure!"  She's my hero, almost 70 years old, lost her hubby a few months ago, and here she is in the Arizona desert in a 14' travel trailer.  Good for her!!!  She spends summers in WA working on her sisters organic farm.  Unreal.

I guess I wasn't in a picture taking mood so there are none of out trip into Q.  The RV Pitstop was a mind bender.  This is an RV mecca right on the main road with everything the RV population needs.  Propane, sewer dumps, water, etc.  We went to the dump station first.  It's separated from the propane area by a short wooden privacy fence which seemed a bit odd but whatever.  Rita began the dumping process as I stared idly around, and noticed there were a few RVs lined up about 20' away.  I kind of assumed they were parked there while people shopped in the little camp store, but I really didn't give it much thought.  Much to my amazement, in rolled a nice Class A behind us, and I heard the driver say to the attendant, "We have a reservation."  My eyes widened and I realized those parked RVs were actually CAMPED there.  Next to the sewer dump.  Where you set out your camp chair next to your rig and watch (and smell) people dumping their crap all day.  And where, from 9-5, you are serenaded by the jackhammer noise of the propane compressors.  Are you kidding?  With thousands of acres of free desert to park in THIS is where you'd make a RESERVATION at?  Wow.  Just Wow.  I *did* want to take pics of that, but I dunno, I felt odd as the guy in the class A was setting up his rig and it felt rude.   I mean, yeah, ok, boondocking isn't for everyone but that just boggled my mind.  I wouldn't have stayed there if it was free.  Here are some pics on the web.  Google Image Search

We also made a stop at Dollar General.  I had resolved to buy a teflon pan at the earliest opportunity as I was having a helluva time cooking on the propane stove in my rig.  Eggs were sticking like mad, I was burning stuff and my thin SS pan had actually warped a bit.  I found out later that the front burner was a high-output one which was part of the problem.  But in the meantime I picked up a set of 2 cheap teflon frying pans for $6.  I would give them to another camper the day I flew out but they helped me survive the week.  I also bought some awful cheap wine.  I can't believe there's not a real wine/beer/liquor store in Q, they would make a mint.

All in all, it was an enjoyable low-energy day.  I was having a hard time reconciling my "I ONLY HAVE A WEEK!!! I HAVE TO GO GO GO!!" mindset with the reality that I was enjoying the company, the weather and the experience and  I didn't HAVE to go anywhere.  I think that will be the biggest adjustment I'll have to make in retirement.  Learning to slow down a bit.  This was a good first lesson.  I kept saying every night, "I'm probably leaving tomorrow."  :-)


As you can see from this pic, last night's campsite put me a little closer to the crowd but I was still on the other side of the road. :-) 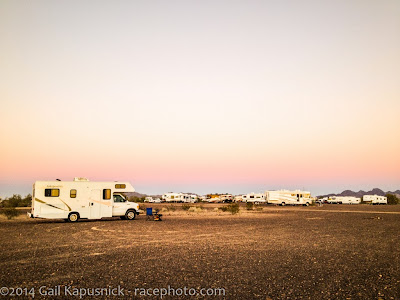 Rita had a campfire at her rig, which was parked much closer to the group.  We could see the rest of the Solos at their fire.  Carol joined us, she had arrived that afternoon driving a large spiffy Class A.  Nice rig! 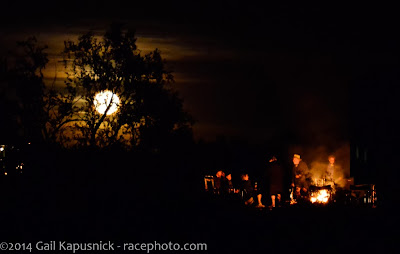 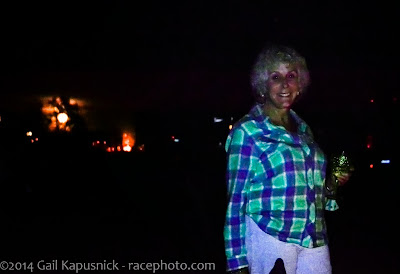 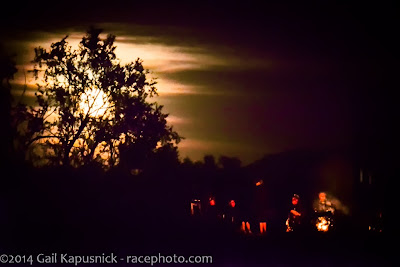 One problem with being closer to people is....you're closer to people.  Earlier that afternoon a small MH pulled in pretty close to Rita & Carol and promptly fired up the jackhammer generator.  They ran it for a couple hours and they hoped that would be the end of it.  It wasn't.  It was probably around 8:30 or so that they got back to their rig & fired up the genny.  :-(  That pretty much put the kibosh on our campfire as it was loud enough to make pleasant conversation impossible.  Ah well.  Carol and Rita decided that if it went on for too long they might move out where I was in the morning.  I went back to my rig and basked in the silence.  :-)