I don't think I mentioned it before, but this was my first night of actual boondocking. (Though it's certainly beginners boondocking asit's so easy to access & so flat! :-)   I'd done Walmarts, Cracker Barrels, Casinos, etc. before but this was my first time being more off by myself.  While there's thousands of RV's at Q, there's still a lot of empty space.  I purposefully went pretty far from anyone as I wanted to see if I'd be anxious.  I'm not generally a fearful person, but new things are new things, and one never knows how one will react.  Turns out I slept like a baby.

My campsite in the morning 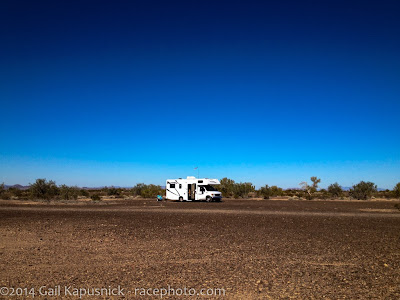 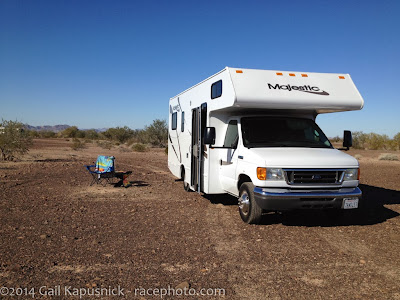 Making coffee in the Aeropress.  I love the Aeropress.  It's a simple thing and it just works.  I also have a Melitta Clever Dripper and a Bonavita Ceramic Dripper, neither of which I brought on this trip.  I'm unsure which I like better to be honest, they all make good coffee & clean up in a snap. 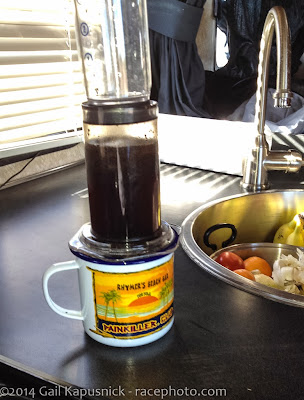 I was still jetlagged and tired from the day before and I had a hard time dragging myself off the couch.  But I had an email invite to join the Escapee Solos for Happy Hour & I wanted to explore downtown Quartzsite a bit.

An Escapee with a nice solar setup. 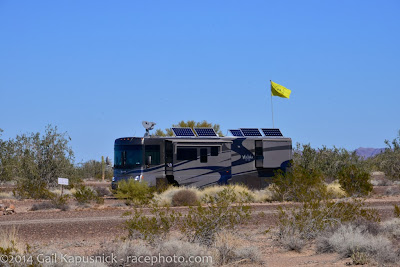 I like the design of the Born Free's...kinda wish I had that overcab storage. 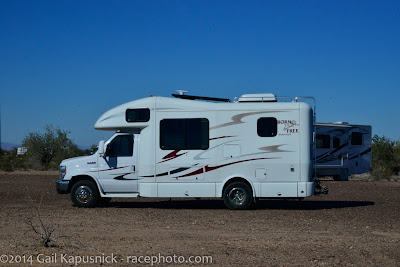 Seen along the highway in Quartzsite.. 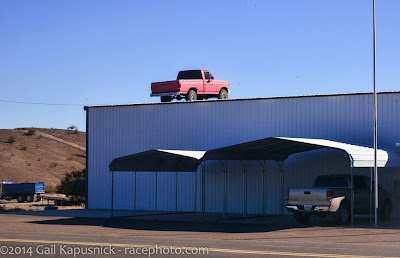 My trip into town was kind of a bust....traffic was miserable and it was hard to see where I might park a 25' motorhome.  Lots of people were using ATVs.  I might have been more motivated to find a place to park if I wasn't so aware I was flying back and had room to bring back about 2 postcards and a pack of gum.  :-)

I got back to Plomosa Road and got my free BLM 14 day permit.  They had been closed last night when I got there.  I looked for the sign for the Solos which I had passed the night before.  I still parked kinda off by myself.  I guess I really am a Solo!!  :-)

Walking towards the Solos encampment

They were a nice group of folks and there were a LOT of them.  Over 60.  I did join their group. 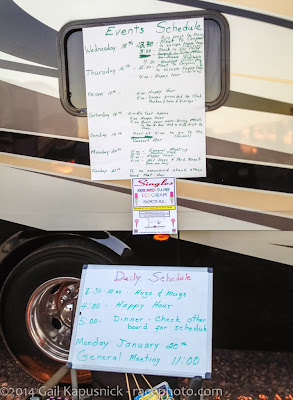 Sat around for a while meeting new folks & drinking wine out my tin cup.  :-) This is living. :-)

Thought this guy was in trouble but apparently not. 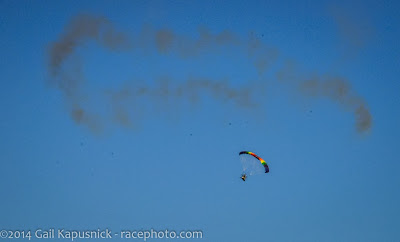 Nice! Haven't seen a 2-seater version of these before... 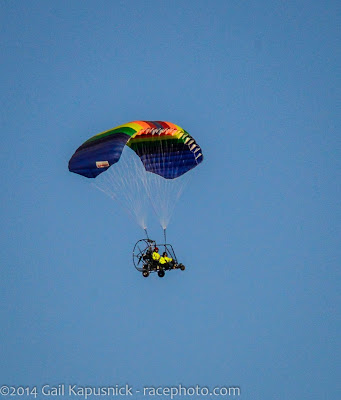 As the Happy Hour was finally winding down, this amazing moonrise happened.  The rig belongs to one of the Christian BOF (Birds Of a Feather, special interest groups) Escapees.  The Christians were cooking breakfast for us Solos the next morning.  :-) 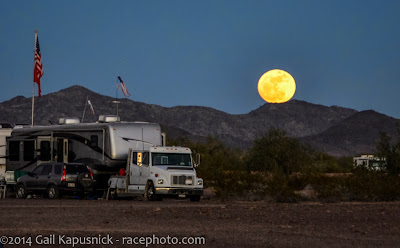 I rejoined the Solos later for some more wine around the campfire but didn't take any pictures.
Posted by Gail at 9:53 PM