11/1/14 Angel Peak Scenic Area. I did see the sunrise, but I didn't get out of bed :-) I finally dragged myself out at 9:30 or so. I made myself some coffee. I had read about putting a bag of green tea in your coffee if, like me, you're not thrilled with the taste of green tea but want the benefits. I tried it and it wasn't as awful as it sounded. I put some coconut oil in too and it was actually pretty tasty.

I took a walk to the toilet and was really impressed with the cg. It was nicer than some I've paid for. Most sites had a nice table & fire ring, and some had shelters. I saw a couple sites I could have gotten into that I missed last night but where I was was fine. I got ready to leave and drove up the hill to the picnic shelters near the 5th wheel. I could have parked there too. But I wouldn't have wanted neighbors that close. When I got out and walked to the edge I was floored. I travel a lot, and I seldom am so surprised at a view where I say out loud, "Wow! Just f&%$ing wow." But I did here. I began to walk, seeing a path leading around the basin. It kept leading me further and further. I finally got out to the 1st of the 3 monoliths. It looked like the path went all the way to the last one, but the steep narrow saddles looked like it might not be a great idea to traverse alone. It would be easy to fall, and who would ever find me? It turned out the folks from the 5th wheel WERE watching me, but I didn't know that at the time. Anyway, I knew there was more to see so I headed back.

I stopped at the next picnic overlook where I found a little vintage trailer parked there with no vehicle or people in sight. I did think it was a bit rude that they parked it right in front of the toilet..... not only is it kinda brazen when you're supposed to be in the cg, but I wouldn't want people walking that close to my rig. And they didn't really give them any choice in that regard. Ah well. While I was there I put up some Command wire holders so I could have the solar panels connected all the time. On days like today where I'm not driving that much but not parked that long it would be nice to get a little boost from the solar. As I was leaving I passed a couple biking. I thought they might be with the trailer, but after thinking about it, probably not as you can't tow even a vintage trailer with a mountain bike :-)

I stopped at another picnic overlook and did some more wandering. Absolutely incredible vistas around. The bikers rolled up as I was walking back, and they were the folks in the 5th wheel. Nice folks, from Houston. They said they had made the hike out to the end and it was VERY narrow & steep. They said they had been watching me.....said when I turned back "I guess she didn't see the path went on". I said, "Oh I saw it....just didn't think it was a great idea by myself as who would know if I tumbled to the bottom?" We had a nice chat but I finally hit the road for real. I headed to the De Na Zin trailhead. I got there about 4:30. I walked for a bit but I kept thinking of the guidebooks that said Bisti was so much better so I decided to head there. Supposedly the dirt road I was on went all the way through 12 mi to 371, another paved highway, then Bisti was @ 10 mi north. Well 7500 (the dirt road) was ok for 80% of the time. 20% was white knuckled, hang on, shit flying out of cabinets, OMG I hope the wheels stay on, washboard. Really awful. And I was driving straight into the sun at the end praying I didn't hit a cow, truck or drive off a cliff. I got to NM371 and turned north, loving the all too brief stretch of wonderful asphalt.

Saw the sign for Bisti & turned down another 3 mi of washboard from hell. I don't quite understand why roads wear in that awful pattern :-( I got to the parking area just after sundown and went for a brief stroll. Didn't go far though as I wasn't keen on being out there in the dark. Around 10pm I got company, a car drove into the lot, turned around & left and drove further down to the second parking area. I guess they didn't like what they saw there as they turned around again and came back to park near me. They were car campers, unloaded a bunch of crap from the car so they could sleep. It looked like most of it was in plastic tubs. Good thing as the wind was howling and every so often we'd get a brief downpour. I was glad I had my little condo on wheels. 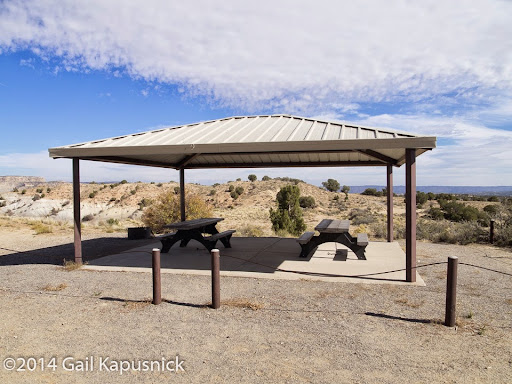 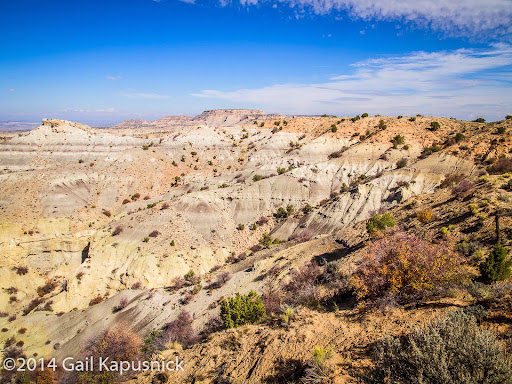 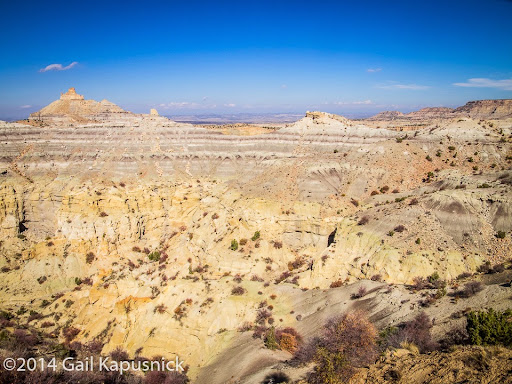 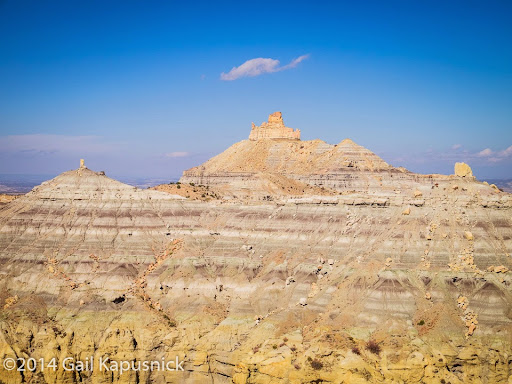 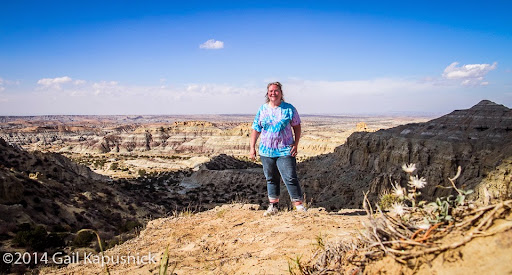 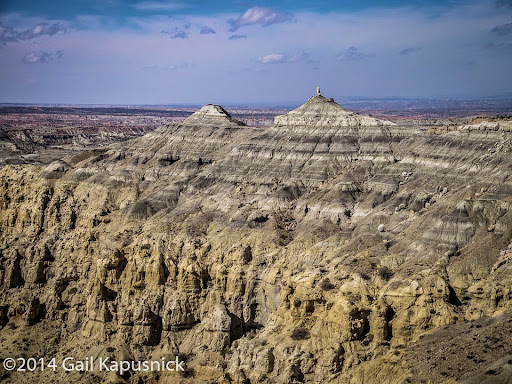 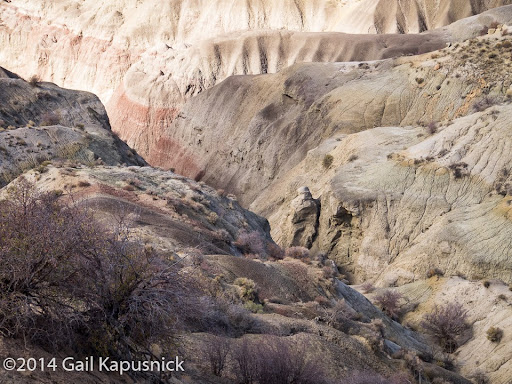 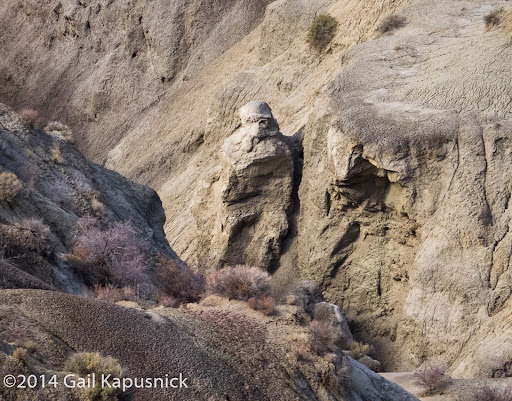 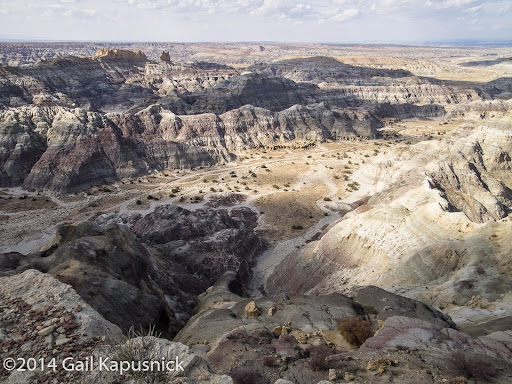 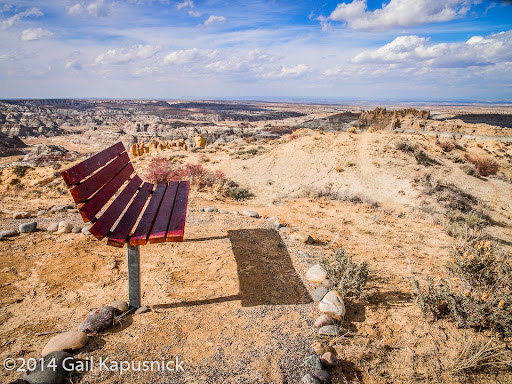 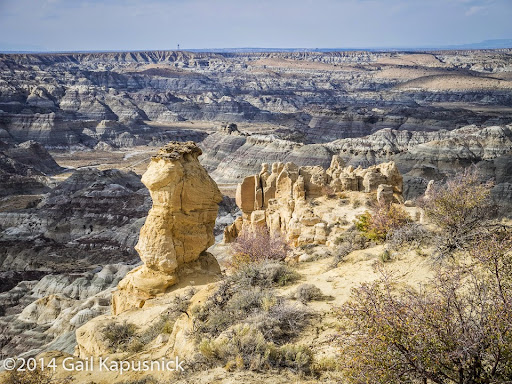 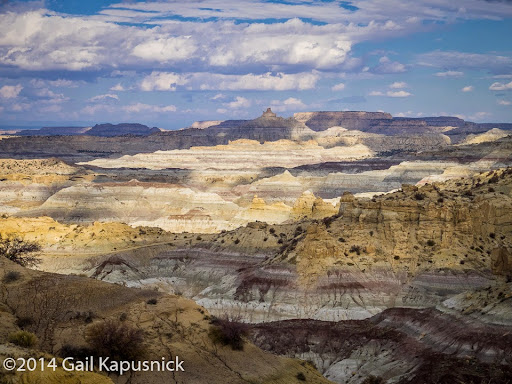 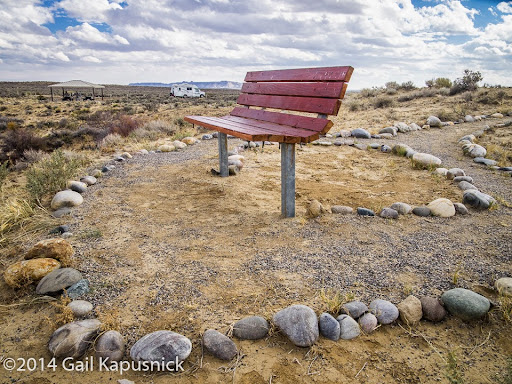 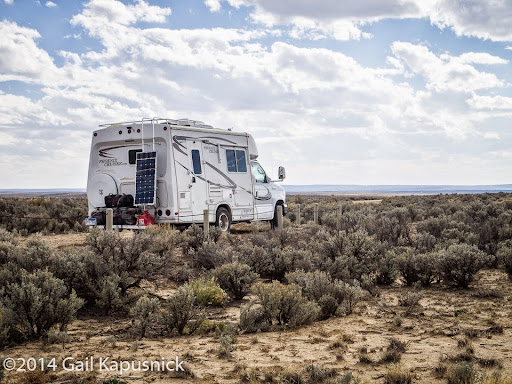 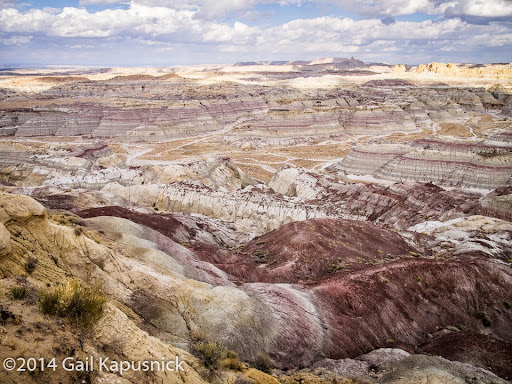 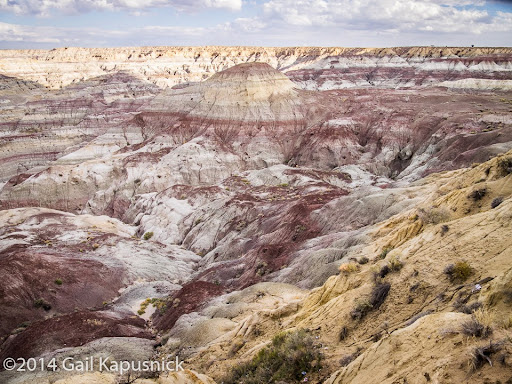 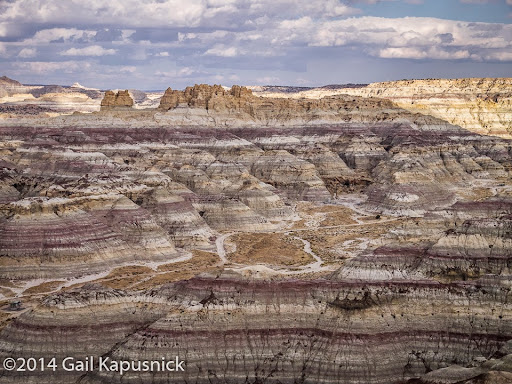 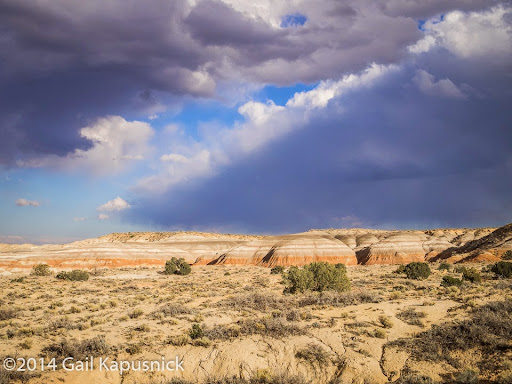 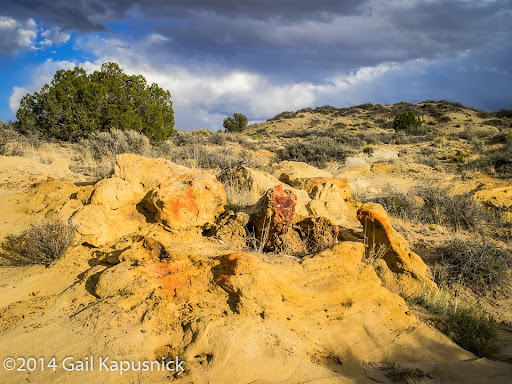 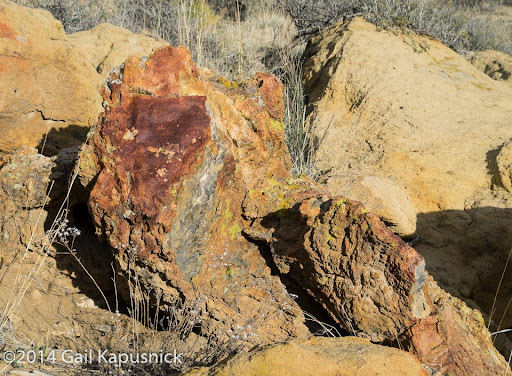 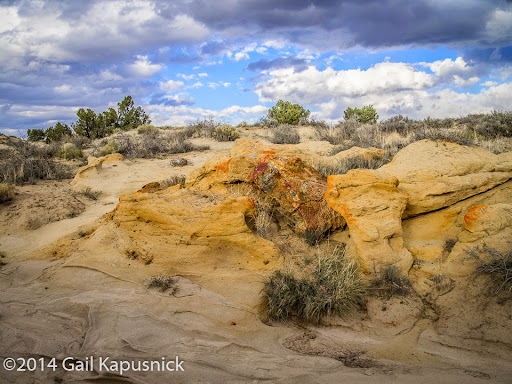 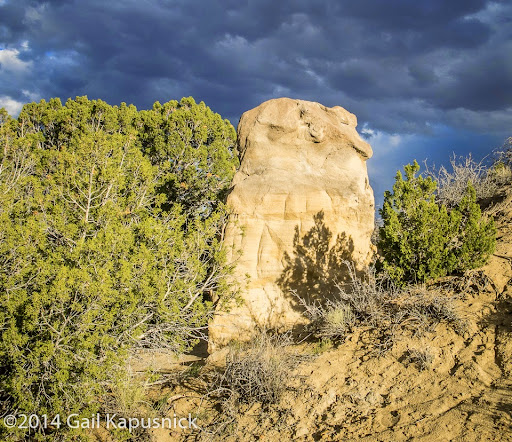 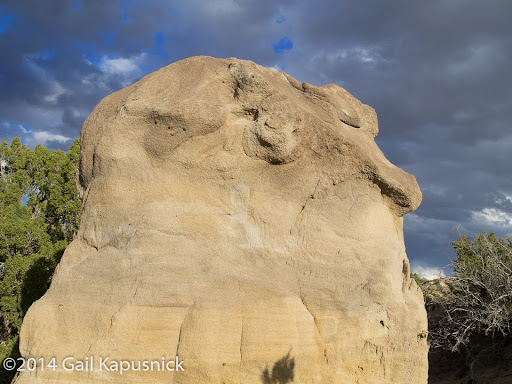 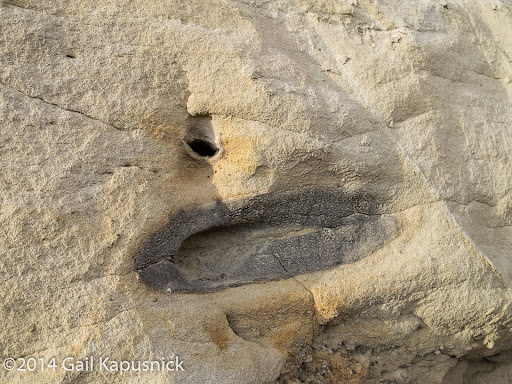 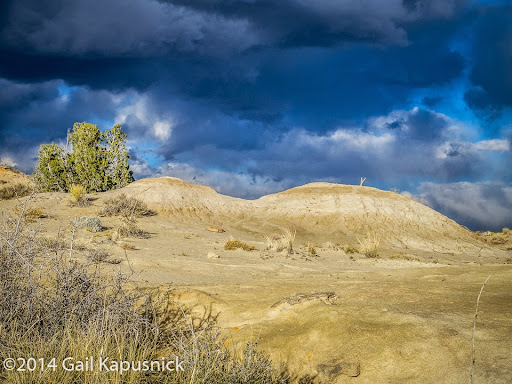 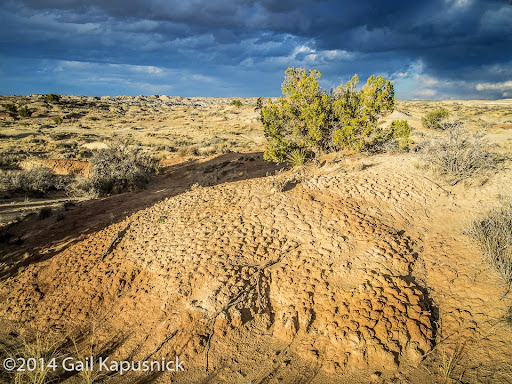 Looking at these photos, this was a gorgeous place. I feel into the trap of reading guidebooks that said Bisti was the place to be, and De Na Zin wasn't worth a stop. So I was on fire to get to the "better" place. I should have lingered here longer.
11/1/2014 5:19:20 PM 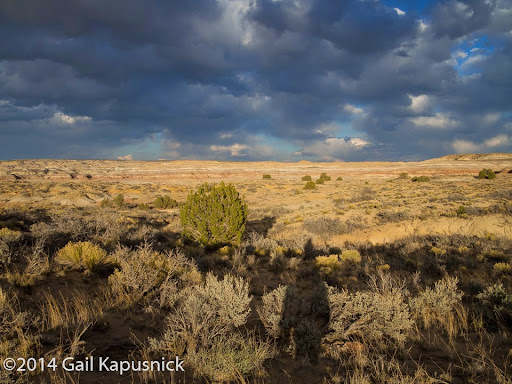 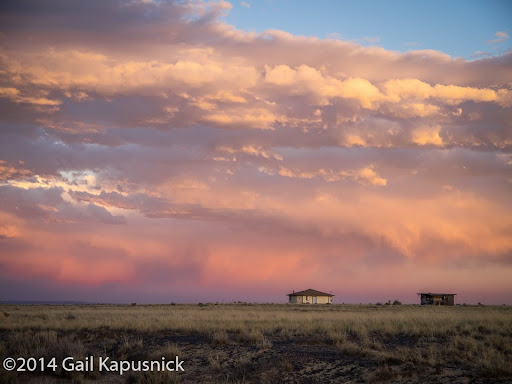 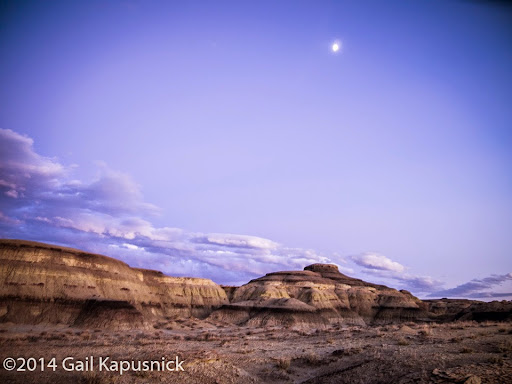 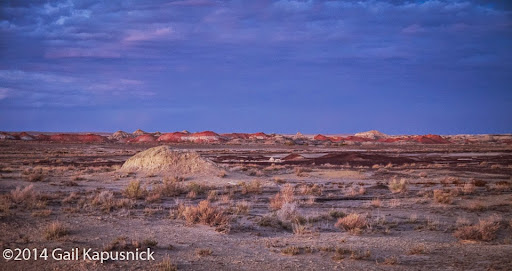