I started out with good intentions of making it a short travel day. Only 75 mi to Roswell.  I got up early, around 7:30. I did some reading & went in to the Subway place for some breakfast. What a mistake. It was filthy. And the gal doing the sandwiches had no clue about anything. I guess she got the egg patties out of the freezer, as despite the cheese melting in the oven, most of the egg was stone cold. The coffee was abysmal too.  Ah well....

Got gas for the 85th time and headed out.

When I got near Roswell I saw this cool display, and made a u-turn to get back & take pics. Glad I did as it was the best thing I saw. I had an image of a little dusty town, with kind of an ET meets Route 66 vibe. I got a medium sized city with mini malls everywhere. Not what I was looking for. 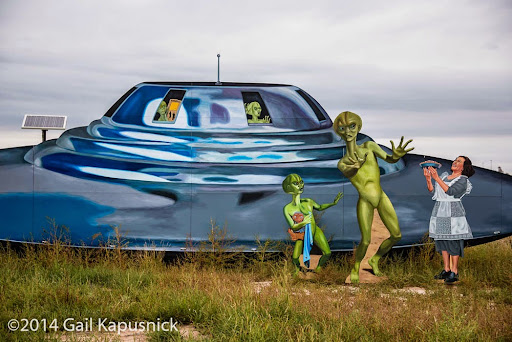 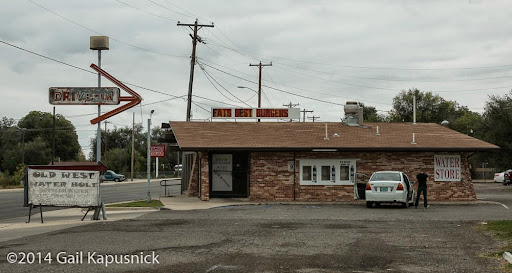 ''
After I decided Roswell wasn't my cup of tea, I aimed for Valley of Fires Recreation area. Some of the drive was really pretty, with fall colors on some trees. I didn't expect that.  I passed through a cute town called Lincoln & didn't stop. Kinda kicking myself for that now. But at least I got to see Smokey Bear. 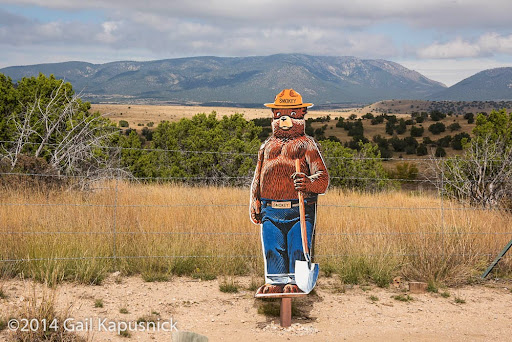 When I arrived at VOF I discovered that it was windy as hell. Rip-the-door-out-of-your-hand-and-off-the-hinges windy. And no cell phone service. I decided I'd be seeing plenty of lava in El Malpais so decided to move on.  I did stop at a scenic turnout & get a few pics of the lava. 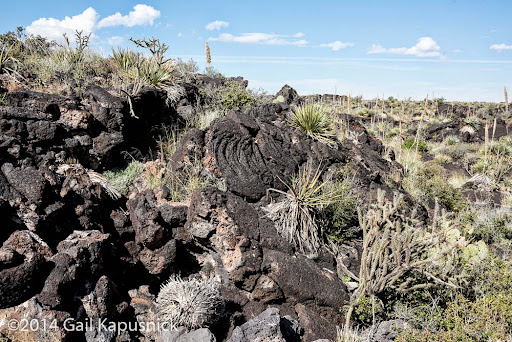 ''
I decided to head to Truth or Consequences since everyone says it's so great. I was pretty tired when I got to Elephant Butte State Park and I knew I was done for the day.  If I didn't find a spot in the park it would be one of the rv parks nearby as I was not up for another Walmart night. The visitor center was closed so I was kind of on my own as to where would be best to go. I wandered through a few campsite loops but they were all full. I saw a dirt road leading down to the lake, and a few 5th wheels & trailers down there.  I said to myself, "If they can do it, I can do it." This turned out to be incorrect. Well, I might have made it but I lost my nerve. The road began to be more soft sand and I was in a panic that I'd get stuck. Turning around would have been really difficult so I backed back up the hill. I was pissed at that point, mostly at myself, but just mad at the world in general as today hadn't gone too well. I went back up to the Ridge Road though I doubted there'd be any sites there since they had nice views. As I approached the end I did see a couple open spots but I could also see a LOT more people down by the shore.  This time I looked carefully before I left the pavement and saw regular passenger cars and a Roadtrek. So I said to myself, "If they can do it, I can do it." :-) This time it was true. There's even a big class A down here. I found a spot away from party central and parked. 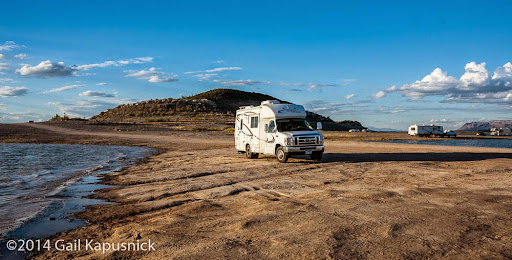 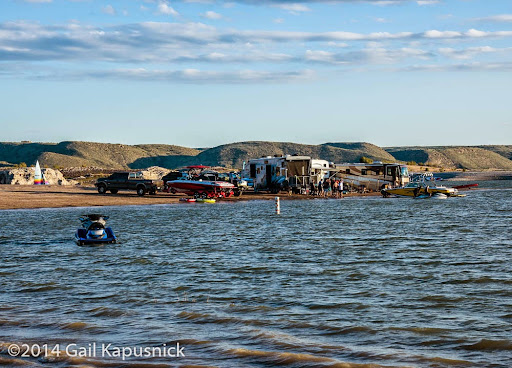 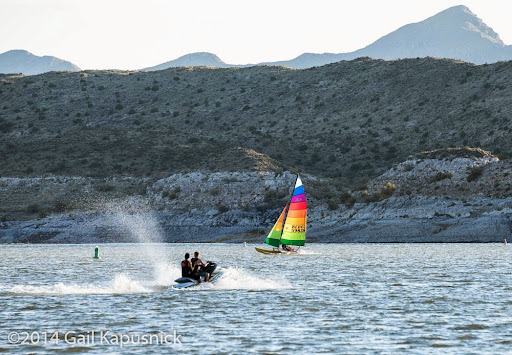 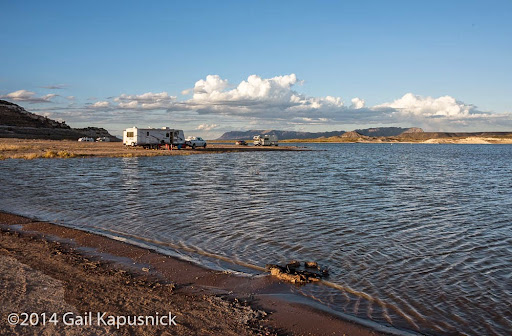 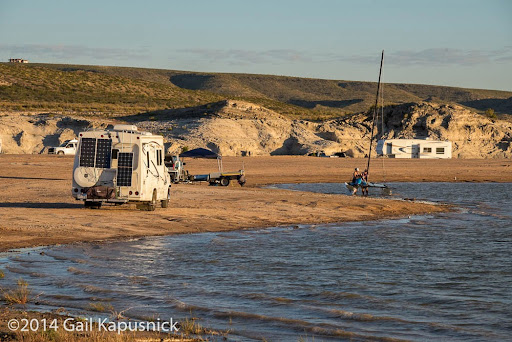 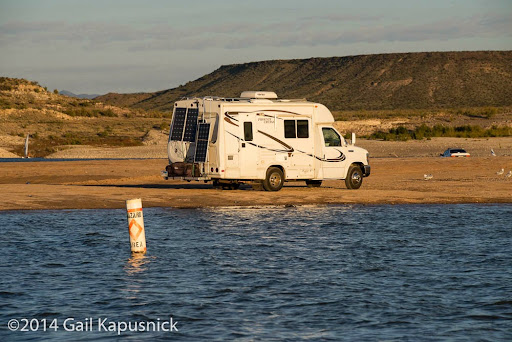 This guy looked like he was IN the water!! 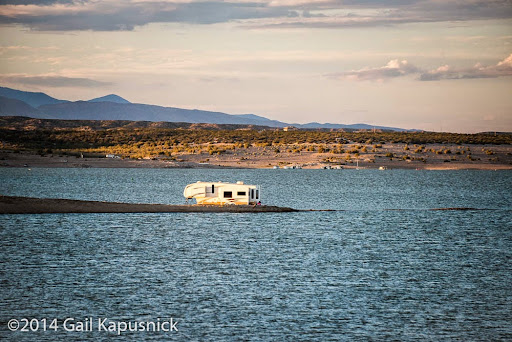 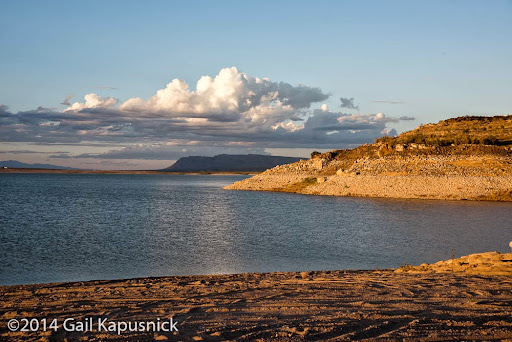 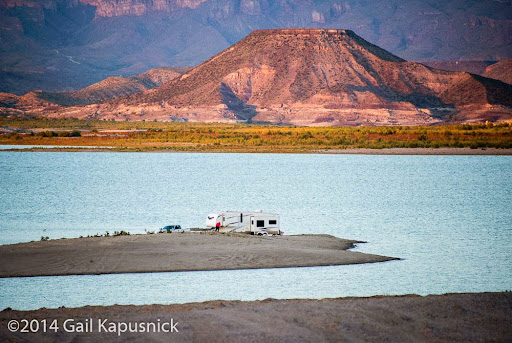 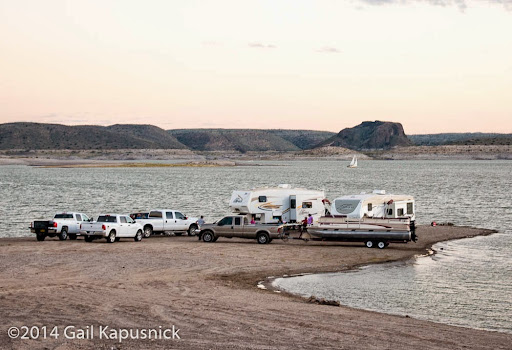 Party Central over there....glad I'm pretty far away as I can still hear their music. 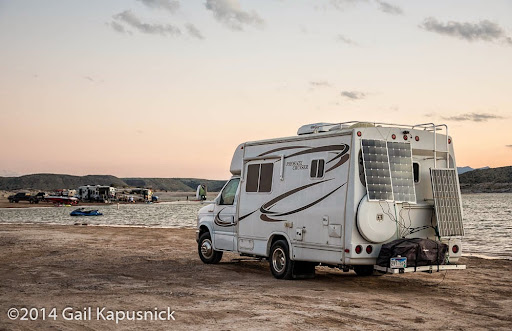 I walked a little over a mile.....I plan to keep that up. I'll probably stay here a day or two, this sort of thing is why I'm doing this. And it should be more peaceful tomorrow night.
Posted by Gail at 12:03 AM